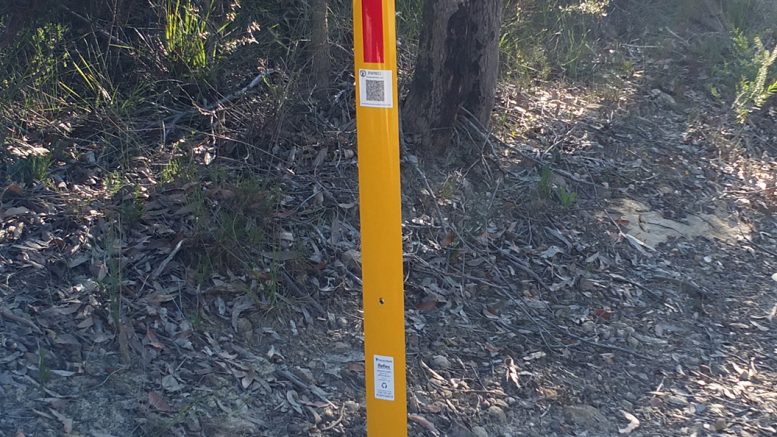 The National Parks and Wildlife Service has marked sections of track within the Brisbane Water National Park to protect vulnerable species from its own maintenance crews.
Yellow roadside markers have been installed on a section of Warrah Trig track with QR codes, describing “restrictions on management actions” due to “threatened flora”.
“All proposals and activities must be reviewed and approved by the NPWS Area Manager prior to works.
“Individual threatened plants must be temporarily tagged and excluded from weed spraying, road-side slashing, grading/roadworks and parking of vehicles, machinery or construction materials.”
Excavation is prohibited within the marker posts at all times without prior NPWS approval.
“All trimmed limbs must be removed from within marker posts at all times.”
One local ranger advised that the public should be aware that the markers are located close to vulnerable species and they also need to take care not to disturb habitat or damage plants.
This was the first time the practice had been trialled in the Park, according to Environment NSW public affairs spokesperson Ms Angela Read.
“Yellow roadside markers, containing important management information are placed near rare populations of endangered plants to assist NPWS staff in protecting the plants.
“The yellow posts with the QR code highlight the presence of a threatened plant and provide actions to NPWS staff when conducting activities within the reserve and assist in the protection of this plant.
“These roadside markers were installed last month as part of the NSW Government’s Saving Our Species program which is aiming to save specific plants and animals from extinction.
“The name of the threatened plant has been purposely left off the QR code as the focus of the post is for use by NPWS staff.
“To help protect threatened plants in the park, we encourage visitors to stay on the formed tracks and report any illegal activities in the area such as illegal dumping.”
A Umina bushwalker who brought the Service’s attention to the existence of the threatened species astrotricha crassifolia (thick-leaf star-hair) at this location at Warrah Trig about 15 years ago, Mr Mark Snell, welcomed the move, but believed it may be a case of “shutting the door after the horse has bolted”.
He said that there had been no evidence of the species at the location for many months and that it had been subject to roadside slashing by the service on a number of occasions.
“Having formal road marking compelling maintenance crews to first contact area management is important for the protection of threatened species.
“If nothing else, this is a good awareness-raising exercise.”
He was critical of the service for being unwilling to identify the species at the location.
“If there is anything we have learnt about protecting threatened species, it is that public education and support serves to help their conservation.
“It was public knowledge that brought the Service’s attention to these plants at this location in the first place.
“It will be continuing public awareness and interest that will ensure that the marker posts will effectively serve a useful purpose into the future.
“And it will be the public expressing its support for the protection of threatened species that will ensure they have on-going legal protection and the best chance of long-term survival.”
Mr Snell said that, apart from species which had a commercial value such as waratahs, the wanton vandalism of threatened species by members of the general public was rare.
He said the challenge with the star-hair was that it was difficult to spot when not in flower.
Its leaves and structure were similar to many of the other heath plants in the area.
While its flowers were distinctive, they could be easily overlooked among other more striking flowering bush plants during its flowering season, he said.
The roadside markers were installed with funding from the NSW Government’s Saving Our Species program.
The program encourages the public to register sightings of any of the listed species in a special section of the Environment NSW website.
“How is the public expected to identify plants if they don’t know what they look like or are unaware of the habitat they are likely to be found in?” Mr Snell asked.
Astrotricha crassifolia and darwinia glaucophylla are threatened species identified on the Environment NSW website as existing in the Patonga area.
The NSW and Commonwealth conservation status of astrotricha crassifolia is “vulnerable” and the conservation project’s aim for the species is to secure it in the wild for 100 years and maintain its conservation status under the Threatened Species Conservation Act.
It is a shrub that grows to 2.4 metres in height, described as a root-suckering with branchlets that have a deep, firm covering of dense hairs. Its leaves are stiff, broad and linear, between two and six centimetres long and 0.25 to 0.4cm wide with a blunt apex and entire margins that are rolled under so the leaf is convex.
The upper surface is shiny and smooth and the lower surface is densely covered in brownish hairs.
The flowers are small, five-petalled and white or cream with mauve anthers.
Activities planned to assist the species include ensuring that roadside and powerline easement maintenance and weed control activities are planned and conducted sensitively to the presence of the species and to avoid damaged individual plants as well as potential habitat.
The program also intends to protect known habitat from clearing, fragmentation, disturbance and modifications to drainage patterns.
The species is also being researched to determine appropriate fire-free intervals and other guidelines for fire management.
Darwinia glucophylla is listed as vulnerable in NSW but not listed by the Commonwealth.
Site-specific information is, again, restricted due to its sensitive nature.
It is a spreading, prostrate shrub with ascending branchlets to 15cm high.
Its leaves are compressed to the side, eight to 17cm long without hairs or scales and blue-grey with a white bloom and often tinged purple.
Fire management, sediment control programs, guidelines for the maintenance of trails and tracks to minimise disturbance to habitat and restrictions on vehicle access are some of the measures being taken by rangers to protect the species.

Limited sign-on so far for Dine and Discover program