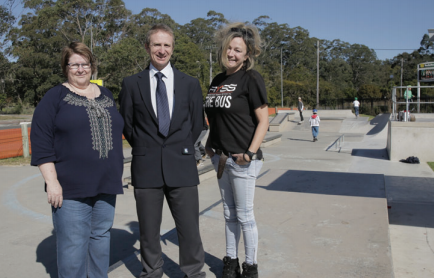 The improvements, made possible with joint funding of $95,000 from Council and $49,200 from the NSW Department of Family and Community Services through the Social Housing Community Improvement Fund, have ensured the facility can better cater for all ages, abilities and skill sets. Council Administrator, Mr Ian Reynolds, said he was pleased to be unveiling the expanded skate place, which would add another high-quality recreational facility to Council’s growing list of new or improved community infrastructures as part of its fully-funded Operational Plan. “Since its original construction in 2007, the Berkeley Vale Skate Park has proved to be very popular, providing endless hours of fun for local skaters,” Mr Reynolds said.

“Council was pleased to be able to partner with the NSW Government to deliver these improvements, including a mini ramp to encourage greater diversity of skills, and end returns to the skate plaza area. “We have also included a shelter and seating to provide a place to stop and rest, enabling parents and grandparents to relax whilst the kids skate.” Investment in quality recreational infrastructure for the Coast’s growing community is a priority for Council and part of delivering on its promise to create a vibrant and sustainable Central Coast. “Council will spend $54 million on upgrading or delivering new openspace facilities in 2017- 18, facilities that our growing community want, value and need,” Mr Reynolds said.