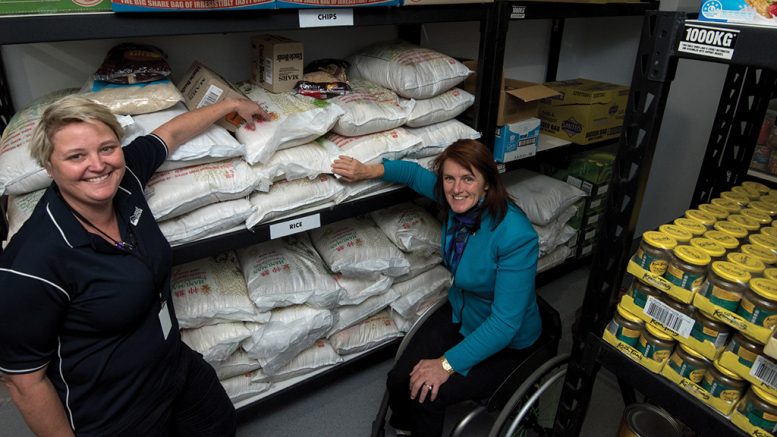 Ms Liesl Tesch, State Member for Gosford, became overwhelmed with emotion as she visited the Gosford headquarters of Coast Shelter for the first time on Monday, June 26.
Ms Tesch was visibly moved by the generosity of the local community when she saw the amount of food donated.
“Coasties really are generous people.” Ms Tesch said.
Meeting with Mr Laurie Maher, Executive Officer of Coast Shelter, for nearly two hours, they discussed the important role the organisation plays across the entire Central Coast.
“Our biggest outgoings are wages, insurance and telephone expenses, all things that cannot be cut back,” Mr Maher said.
The demands on the Central Coast are continually growing, compelling Coast Shelter to also grow to meet the needs of the community.
More than a soup kitchen, Coast Shelter houses vulnerable people escaping homelessness and domestic violence, provides money for medicine, food hampers and support for those in need.
“Housing affordability is often confused with social housing.
“The people we see are not even addressed in the affordable housing debate.” says Mr Maher.
“In many cases on the Coast, families have to decide if they pay for the roof over their head or food for their children.”
The high cost of housing and the shortage of suitable accommodation forces more people onto the street each week.
Mr Maher and Ms Tesch discussed the lack of funding for social housing projects in the latest State budget.
“The Government has spent up big on roads around Sydney, but no funding for social housing projects” Mr Maher said.
Coast Shelter has nearly 100 employees and hundreds of volunteers helping through increasingly difficult times.
Ms Tesch said she would be happy to accept donations of coats and warm clothes at her electorate office in Blackwall Road, Woy Woy.