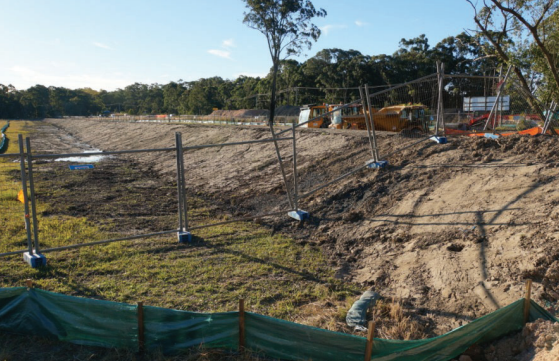 Council has described the work as “minor storm water management works”. However, Wyong Regional Chronicle understands that the fl ood mitigation work underway along Sparks Rd is part of an application for a Section 96 amendment to DA 1453/2016 for the Amphibian Aerospace International (AAI) hangar, offices and carpark at Central Coast Airport. The Section 96 application has not yet been approved or rejected by Central Coast Council. CEN wrote to the CEO of Central Coast Council, Mr Rob Noble, and to Council’s Group Leader of Environment and Planning, Mr Scott Cox, on June 22, and again on July 13.

“We noted the basis for the DA modification was a study by GHD called ‘Central Coast Airport: Flood and Master Grading, Flood Assessment Report’, commissioned by Council,” he said. “This study proposed fl ood mitigation works consisting of a levee along the northern boundary of the airport and new culverts under Sparks Rd. “The study concluded that these works would lower the one per cent probability fl ood level on the airport and increase the one per cent AEP flood level in Buttonderry Creek by 230mm. “The GHD study also mentioned the impacts of these works on Porters Creek Wetland.

“Chapter 3.10 Wetlands Management in the Wyong DCP, indicates that all of the airport site and adjoining land is in the Wetland Management Area for Porters Creek Wetland. “Under Part 5 of the EP&A Act, which applies to a public authority undertaking development without development consent, Council is required to consider whether the fl ood mitigation works will have a signifi cant environmental impact. “As a minimum, we understand that Council should have prepared and considered a review of environmental factors. “CEN is of the view, given the importance of the SEPP 14 Wetland, that Council should prepare a full EIS with proper public consultation,” Mr Asquith said. Wyong Regional Chronicle obtained a copy of Council’s response to CEN’s questions in which Central Coast Council’s General Counsel, Mr Brian Glendenning, said: “Council commenced storm water management works, as indicated in the GHD Study.

” In response to CEN’s question about whether Council had considered the potential environmental impacts of the works, Mr Glendenning responded: “Yes”. “An appropriate e n v i r o n m e n t a l assessment, meeting the obligations imposed by law, was prepared prior to the commencement of works,” he said. He added that Council was “not required” to prepare or exhibit an EIS to assess the impact of the fl ood mitigation works on Porters Creek Wetland. Central Coast Council’s offi cial response to Wyong Regional Chronicle’s questions about the work near Sparks Rd was: “Council is undertaking minor storm water management works along the north boundary of the airport land, to improve the management of storm water in and around the Airport.” “I am amazed that Council considers an earthen wall to hold back flood waters, which must be at least several hundred metres long by 1.5 metres high, is minor works,” Mr Asquith said.

“We are talking about earthworks at least 1.5 metres high with signifi cant removal of trees and signifi cant raising of the road into the airport,” he said. “I would be surprised if Council can demonstrate a precedent where such works are considered minor. “CEN considers they are signifi cant works because they are likely to impact on the protected SEPP 14 wetland, south of the airport. “They appear to concentrate the fl ow of floodwaters near the airport into a stream that is very likely to damage the SEPP14 wetland and the adjoining vegetation of threatened species.

According to Mr Asquith, following the implementation of the Warnervale Airport (Restrictions) Act in 1996, in around 2000, the NSW Government decided to protect the wetlands to the south of Warnervale Airport because of its important vegetation and to maintain water quality into Wyong River. “Porters Creek is the largest wetland on the Tuggerah Lakes system and it was seen as essential that, to maintain the quality of water in the Tuggerah Lakes, Porters Creek be protected,” he said. “Porters Creek is also part of the Central Coast water supply because of its reliability in a drought.

“In the millennial drought (the 10-year drought in the late 1990s and early 2000s), temporary works were carried out by Council to capture the water from Porters Creek before it entered Wyong River to supplement the water supply. “The reason that Porters Creek is so important to the water supply is that it is in a coastal catchment and closer to the ocean, so in a drought, the rainfall over Porters Creek was much greater than occurred inland where Mangrove Dam is located.

“Our water supply was down to 14 per cent during that drought. “So this water [Porters Creek wetland] became crucially important to us and inevitably we will face another drought, and the cheapest and best supplementary water available will be Porters Creek wetland if we look after it,’ Mr Asquith said. Looking after it would mean: “Not allowing it to be polluted by airport runoff, maintaining the stability of the soil by not clearing and digging up the vegetation, maintaining the vegetation cover on the wetland. “This work is the other end of the runway to the actual wetland.

“The vegetation each side of the runway is mostly swamp forest. “A lot of that vegetation has been cleared, but by building this levee, they will channel the water into a line where the water won’t go through the natural vegetation needed to sustain a wetland. “If the Council goes ahead with its plan for a much expanded airport, it will bring a lot more pollutants into the water. “The Central Coast Council is both a local council and our water supply authority, and as such, it has a responsibility for ensuring our water supply is clean, healthy and safe to drink.

“That is above and beyond everything else they have as their ambition. “So the Council has the responsibility to look after the public land, our water supply, and to ensure that any development in the area is according to law. “The Council, at the end of the day, has what they call statutory responsibilities. “If they fail to follow those statutory responsibilities, and make decisions that we think are incorrect, there are a number of options open to us. “There is obviously legal advice, and there is a Council election coming up where we will encourage people to look at the record of Council and Councillors, and we think people should be very concerned about Council not appearing to be carrying out its responsibilities.

“The State Government’s policy in regard to the expenditure of public funds is generally that the beneficiary pays, because it is assumed that the government is only working on things in the public interest. “Here, with the work to make way for the AAI Section 96 application, the rate payers’ money is being used to enhance the private interest,” Mr Asquith said. “It is most unusual for a public body, such as a council, to use rate payers’ funds when the only immediate beneficiary appears to be AAI. “If the work is to protect Sparks Rd from fl ooding, why is it on the downstream side of the road?

“These works could affect many tens of hectares of land, not just the airport site. “A whole lot of water, up to 1.5 metres deep, will go to the north and the land to the south of the levee could be deprived of water. “The area of land that will be fl ood affected after this work will be signifi cant and may affect businesses, and this is why it is important that council does a proper flood study,” he said. According to Mr Asquith, a SEPP14 wetland is a wetland defined by the vegetation on it and not its location on a map. “Australia in general is getting dryer, but the coast is getting wetter because of climate change, so the boundaries of the SEPP 14 will change. “We would expect any council, before they do anything that could have an impact on a wetland, would map the wetland to keep it protected,” Mr Asquith said.

Central Coast Council’s official response to Wyong Regional Chronicle’s questions about the work near Sparks Rd was: “Council is undertaking minor storm water management works along the north boundary of the airport land, to improve the management of storm water in and around the Airport.”