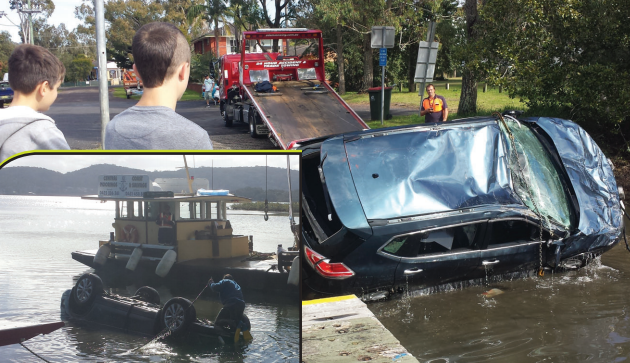 Car being pulled out of the water at Davistown Photo: Anthony Wagstaffe

The Marine Rescue Central Coast radio room received a phone call from NSW Police Marine Area Command (MAC) after they were advised that there was a car in the water off the Eulalia Wharf boat ramp in Davistown on Sunday, July 9.

The unit’s new Rescue Water Craft, Central Coast 11, was already out on patrol and they also headed towards Davistown. Once the car entered the water, it fl oated approximately 200m from the boat ramp and sank down to the mud. It seems that the car’s owner did not put the handbrake on. CC21 and CC11 found the car and it was decided that the only way that they were going to be able to successfully get the marker buoy attached to the car was for the rescue water craft operator to get into the water, dive down and attach it to the car.

When the marker buoy was successfully attached, CC21 and CC11 both headed back to base, and the radio room stopped their ‘Securite’ message in regards to this navigational hazard.

Davistown Wetlands protection group to meet with all tiers of Government