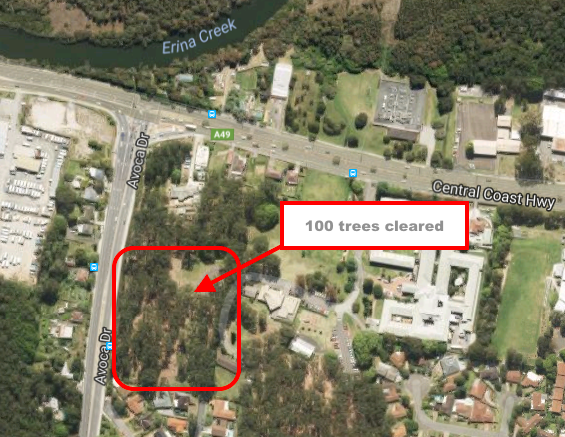 The Central Coast Branch of the Australian Conservation Foundation (ACFCC) wants Central Coast Council to adopt an urban forest policy and a 20 per cent increase in street tree cover across the Coast.

ACFCC has asked all candidates in the September 9 local government election to support its call.

“Yet the members of the ACFCC are concerned about the many incidences of urban tree clearance since the administrator’s reign started in the amalgamated council,” Mr Ellis said. “Some contend the decrease in tree protection is a flow on effect of having no real community representation from councillors,” he said.

“Planning and development is required, yet an understanding of the benefits trees bring to an urban landscape is being lost in the drive for the dollar and the need to squeeze as many houses in as possible. “As stated in council documents, trees are part of what make this LGA such a unique and beautiful place to live in.

“Urban trees exist within our suburbs and play an important role in enhancing the city’s character and environment. “The benefits of trees in the urban environment are many and can provide cost-effective return on investment in reducing heat stress, making the streets more walkable, reducing particulate air pollution, moderating the heat island effect, and enhancing drainage mitigation and carbon sequestration.

“We went from a council which was open for business to a council of ‘she will be right’, but it is really a case of fiddling while Rome burns with tree protection in retrograde. “Many councils have urban forest policies that help plan and protect urban trees. “Such a policy was raised within Gosford Council in June, 2014, but three years later, such a policy still doesn’t exist. “It’s imperative that Council adopt an urban forest policy which affords greater protection for trees in small or large developments and plans for a 20 per cent increase in street tree cover across the Coast. “Such a policy would also provide more accountability and transparency in how trees are removed. “We call on all candidates in the Central Coast Council election to support such a policy,” he said.

Once in a generation coastal management reforms explained

Central Coast Tourism required to submit an Expression of Interest