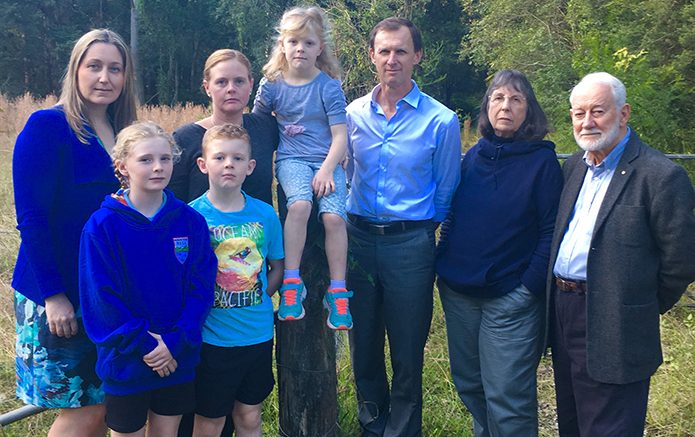 Federal Member for Dobell, Ms Emma McBride, and State Member for The Entrance, Mr David Mehan, have labelled the NSW Government’s proposed rail maintenance facility at Kangy Angy the “right project, wrong site” after the Federal Government released strict approval conditions to protect habitat for critically endangered species at the site.
The Federal Environment Department’s assessment of the Transport for NSW proposal under the Environment Protection and Biodiversity Conservation (EPBC) Act, has determined that the project may only proceed in adherence with strict environmental restrictions, including: a Groundwater Management Plan to minimise the impacts on Biconvex Paperbark; biobanking to minimise the impact on foraging habitat for the critically endangered Regent Honey Eater and Swift Parrot; Land clearing limits of 19.6ha of high quality swamp forest and 3.6ha of wet open forest; and demonstrated adherence to a number of NSW Department of Environment and Heritage regulations.
Mr Mehan said: “The Minister has to defend this, not only to the residents of Kangy Angy and the Central Coast, but to every taxpayer in NSW.
“We want to see this project happen on the Central Coast, but given the increasing environmental and financial cost of this project, I have great concerns the jobs may be lost to the Coast.
“The Government has already had to add a multi-million dollar bridge to the project just to overcome the flooding issues on Turpentine Road.
“The Department will now be required to buy and protect more than 20 hectares of coastal bushland to meet the offset requirements put on the development by the Federal Environment Department, as well as manage the land in the future.
“How much is that going to cost?
“We know the Department preferred other sites on the Central Coast, do they still believe this is the best spot to build this facility?
“Central Coast Council needs to make it a priority to engage with Transport NSW on this issue to make sure alternate sites are available on the Central Coast,” Mr Mehan said.
Ms McBride said the project would only proceed if strict environmental conditions were met.
“This decision proves that proper process must always be in place for development proposals, and that rigorous environmental assessment should be done,” she said.
“I’m pleased to see the impact on foraging habitat for the critically endangered Regent Honey Eater and Swift Parrot is now being considered as part of this development.
“There are now serious questions around how the NSW Government will manage the offset requirements and whether land clearing restrictions change the scope of the project.
“The NSW Government needs to explain how this is the right site.”

Further removal of trees to take place at Kangy Angy