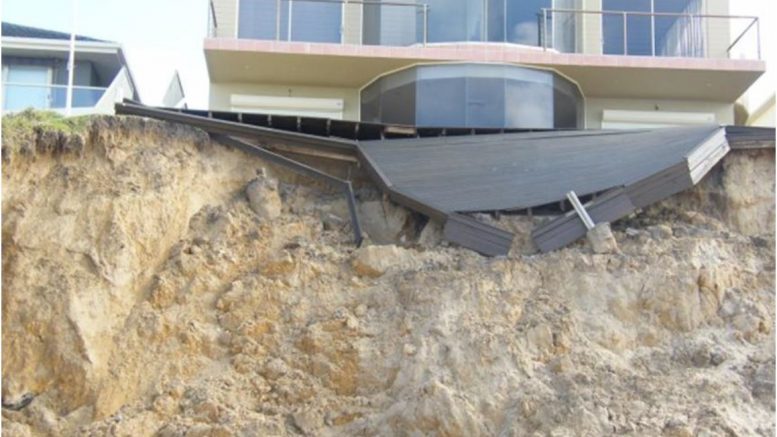 The six Wamberal home owners who have been attempting to get approval to build a revetment wall to protect their properties from storm surge and erosion have been told to lodge a fresh development application.
Following the June 2016 East Coast Low that caused substantial erosion at Wamberal, the six residents, whose properties are located south of The Ruins, in Ocean View Dve and Pacific St, lodged a development application to build a protective revetment wall between their land and the beach.
The NSW Coastal Panel was still the consent authority then, as the Central Coast Council’s Coastal Zone Management Plan (CZMP) for the Gosford beaches had not been signed off by the NSW government.
The Coastal Panel did not assess the development application within the required time frame, so it was a ‘deemed refusal’.
On that basis, the residents decided to appeal that deemed refusal in the Land and Environment Court (LEC).
“Meanwhile the CZMP was gazetted by the NSW government, which made the Central Coast Council the consent authority,” one of the residents, Mr Eugene Marchese said.
He said the residents requested that Central Coast Council join the current Land and Environment Court hearing so the matter could be determined.
“A barrister was sent by Council to say that they didn’t want to join the hearing,” he said.
“We are absolutely nowhere as a result of that, we have to lodge a new DA with council and start all over again.
“We have spent $400,000 on legal and consulting costs, and a year later, we are speechless and the storms will come, the storms are coming.
“I was in London at the time of the Grenfell fire and to sit and watch those poor people saying that they had been warning council of the dangers for years and nothing was done left me speechless, because the one thing all the experts agreed on in the LEC case was that, in the next storm, these six houses will end up in the ocean.
“It will happen.
“Last June at 8.55pm, I was standing on our landscaped platform and my 17-year-old son was on the platform above.
“I saw a wave break 100 metres off shore and the wash came through like a razor, and if my son hadn’t been there to hold on to me, I would have been washed away,” he said.
Mr Marchese said the engineer who designed the revetment for the residents based the design on the revetment proposed for Wamberal in the CZMP.
“If the council had joined the hearing, the matter could have been resolved, but the LEC basically told us to lodge a fresh DA with Central Coast Council,” he said.
Mr Marchese is an architect with offices in Australia, the United States and the United Kingdom who is accustomed to working on major projects.
“I have never dealt with something so illogical and unreasonable in the history of all our projects,” he said.
“We have been involved in substantial projects all over the world and this just blows my mind.
“We could have gone and done illegal work, as other Wamberal residents had done, but we decided to be good citizens and do the right thing and we were prepared to pay for the work.”
Mr Marchese said both Central Coast Council and the Coastal Panel had encouraged the residents to lodge their DA.
He said the six property owners understood that other rate payers may not believe it was their responsibility to pay to protect beachfront properties “but we were willing to pay”.

“The people who have won this time are the same people who have been winning for the past 40 years, the bureaucrats and politicians who don’t want to make any decisions to protect homes, to protect the public,” he said.
Mr Marchese said the former Gosford Council had voted three times in the past 20 years to take steps to protect properties along Wamberal Beach, but no action has ever been taken.
He was also critical of the approach taken by the Coastal Panel.
“Professor Bruce Thom [Panel Chair] sat in two Section 34 Mediation meetings and road blocked us all the way.
“We did everything they asked us to do, we investigated The Ruins and spent $40,000 to determine that there were no Aboriginal artefacts or protected species that could be impacted at The Ruins,” he said.
“The Coastal Panel is charged with managing the coastline, but Professor Thom didn’t show up at Wamberal until eight months after the storms.
“Can you imagine what would happen if there was a bush fire in the Blue Mountains and the chairman of the relevant authority whose sole purpose was to manage that asset didn’t turn up for eight months?
“I am of the opinion that for the last 40 years, nothing has been done because there are no funds, the biggest issue has been that there was no will for anyone to take action and that is why we offered to pay for it ourselves,” he said.
He also addressed the argument that Wamberal should never have been zoned for residential development in the first place.
“It is an argument that is valid in some peoples’ minds,” he said.
“If the six houses were breached, then the value of the infrastructure that could be lost in Ocean View Dve and Pacific St, NBN, sewer, water and electricity, could not be calculated and 400 houses would be at risk.
“If the six houses were not there, then 400 houses could turn into 1,000 that would be smashed in floods.
“Central Coast Council is happy to charge Wamberal’s beachfront residents the highest rates on the Coast, but is reluctant to help us protect our properties.
“They talk about making this region a tourism mecca, but Wamberal Beach is a disgrace and they were quick to build their own revetment at Terrigal after last year’s storms.”
Mr Marchese said the six residents have requested a pre-DA meeting with Central Coast Council and were waiting for council to provide confirmation of the date and time.