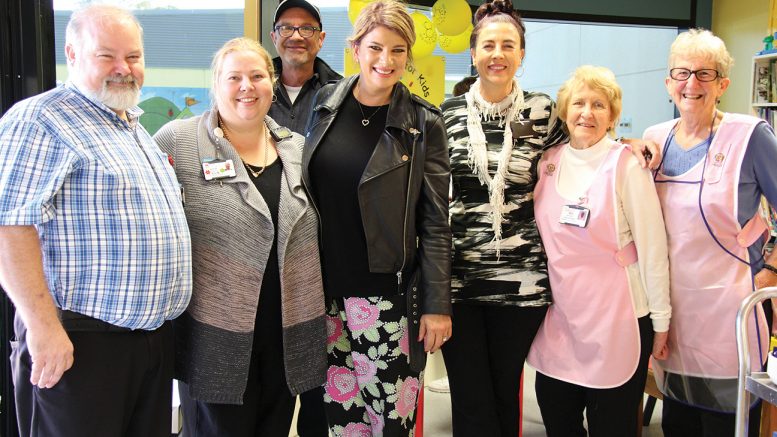 Gosford Hospital Children’s Ward was abuzz with excitement on June 1, as radio station 2GO launched its annual Give Me 5 For Kids fundraising appeal.
2GO breakfast announcers and a host of other 2GO staff were joined by Central Coast Local Health District (CCLHD) staff in kicking off the region’s iconic charity campaign. now in its 23rd year.
The Give Me 5 For Kids appeal has donated almost $2m to the CCLHD to support the treatment and care of sick and injured children, including a record $140,000 in 2016.
The District’s paediatric services have been a main beneficiary of the fundraising drive since 1994, when 2GO stalwart, Sarah King, came up with the simple yet brilliant idea of donating spare 5 cent coins to a worthy local cause.
Give Me 5 For Kids has since grown into a national fundraising initiative, raising more than $24m for children’s healthcare services across the country.
CCLHD Chief Executive, Dr Andrew Montague, said all donations received by the District remained on the Coast and went directly to patient care.
“Give Me 5 For Kids is a fantastic cause for the community to get behind and has made a positive impact to our children’s services,” Dr Montague said.
“Thanks to last year’s appeal, we purchased several pieces of equipment, including a cardiac monitor, for Gosford Hospital’s Emergency Department and a resuscitation trolley for our youngest patients in the Special Care Nursery.
“I encourage anyone looking to make the best use of their small change, and even their large change, to consider donating to Give Me 5 For Kids,” he concluded.
Central Coast radio presenter, Sarah King, said the Give Me 5 For Kids appeal was one of her biggest career highlights during her last 27 years on the airwaves.
“I’m thrilled that’s it’s June again.
“It’s our favourite month of the year.
“It’s always beautiful watching the Central Coast getting so involved and being so passionate about raising money for our very own sick children.
“Let’s make it another great year,” King said.