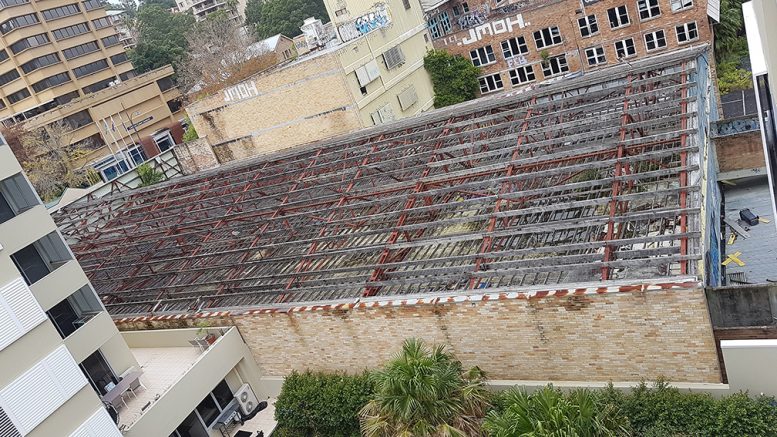 Looking down on the former Froggy’s building towards Georgiana Terrace Photo: Justin Stanley

Gosford’s longest-standing eye sores, the remains of the Froggy’s skate rink on Mann St and the office building on the corner of Baker St and Georgiana Tce, are about to be demolished as part of preparation for phase one of the triple-tower Waterside development.
The $234m Waterside development was approved by the Joint Regional Planning Panel in December 2015.
The approval made way for the site to be developed for commercial and residential use as well as incorporate a cinema, hotel and tavern.
Project architect, Mr Cain King, from CKDS Architecture at East Gosford, said the New Hong Kong Macau Australia Pty Ltd had the keys to the site and had commenced cleaning up the interior, including some asbestos removal.
“All fees have been paid to Council,” Mr King said.
Mr King said a plumber had also been on site turning off the water supply, and fencing was to be erected so demolition could begin.
The applicant lodged a Section 96 amendment in April to modify the development consent to allow demolition of part of the site prior to the issue of a construction certificate.
No other alterations to the development were requested as part of the Section 96 application, however, the demolition work will constitute commencement of the development, so the applicant will have met their responsibility to commence work on the development prior to the expiry of Council’s consent in December.
Mr King said the developer did not intend to commence construction of the first stage of the development until late 2018.
A letter from PJ Donnellan and Co solicitors accompanying the Section 96 application also stated: “This addition will allow our clients to begin demolition work that does not interfere with any heritage sites that are part of the approved DA located at 50-70 Mann St, Gosford”.
However, Mr King said the demolition would facilitate alternative uses for parts of the site in the interim.
“With the demolition on the site and the focus of stage one not to commence until next year, we are hopeful that Council will approve some alternative uses,” Mr King said.
“Some of the possibilities include pop-up marketplaces, parking, or the possibility of utilising the site as a holding area for construction vehicles as multiple projects are underway in the CBD, so that they can have access to construction sites without disrupting traffic,” he said.
As the local government election approaches and the current Administration period winds to an end, decision-making within Central Coast Council appears to be slowing down, but Mr King said he was hopeful that Council would see the value of putting the site to use once demolition is complete.
The land does form part of Central Coast Council’s current planning proposal to move the commercial core of the Gosford CBD towards the waterfront.
“This planning proposal proposes to rezone the land from B4 to B3 Commercial Core,” said a Council assessment report written to consider the merit of the Section 96 application.
“The planning proposal does not affect the s96 application, which is to permit demolition prior to the issue of a Construction Certificate for building works,” the assessment report said.
“The subject site is zoned B4 Mixed Use under Gosford Local Environmental Plan 2014.
“The proposed development is defined as commercial, shop top housing, hotel, and entertainment facility, as defined in Gosford LEP 2014, which is permissible in the zone with consent of Council.
“The proposed land uses are also permissible in the B3 zone, subject to the exhibited planning proposal.
“The proposed modifications will not result in adverse amenity impacts on the adjoining properties and the streetscape,” the report concluded.
“The proposed development is substantially the same as the development that was originally granted consent.
“As such, in accordance with Section 80(1)(a) of the Environmental Planning and Assessment Act 1979, the Section 96(1A) for modification is recommended for approval.”
When actual construction commences, the three-tower project will be completed in three stages, each lasting five years.