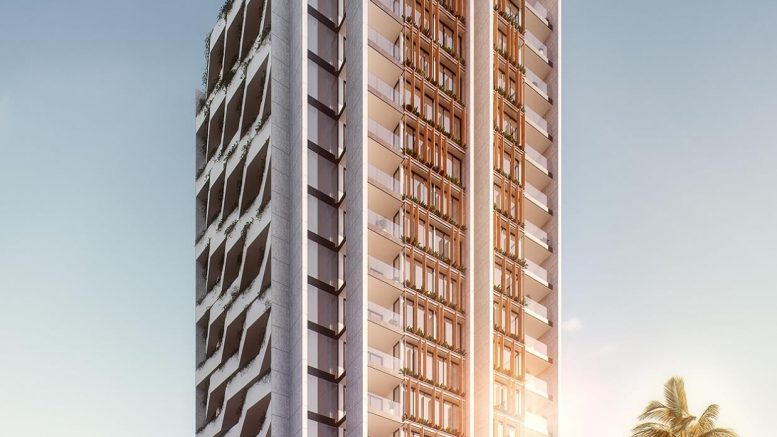 An artist's impression of the Ikon tower

Apartments in the $34.24 million, 21-storey Ikon Tower residential and commercial development at 333 Mann St, Gosford, are being offered for sale off the plan.
According to Ray White Commercial NSW, the building, boasting 102 apartments and 500 square metres of commercial space, is being developed by JMGM & GWPG.
Mr Jeff Moxham, from Ray White, said the landmark mixed-use project was the latest tower being constructed in a range of new developments set to transform Gosford’s skyline into a modern metropolis.
“These projects are revolutionising Gosford and delivering a world class city centre,” Mr Moxham said.
“333 Mann St was approved by the Joint Regional Planning Panel in late 2016 and will boast 102 apartments in a mix of one, two and three-bedroom floor-plate designs, with 500 square metres of commercial retail below.
“Mann St is already a hive of activity with John Singleton’s first high-rise project, Bonython Tower, being developed on the Dutton’s Tavern site.
“JMGM is also proposing a 24-storey tower with 189 residential apartments and 2500 square metres of commercial-zoned retail at 325 Mann St.”
The $368 million upgrade of Gosford Hospital is directly opposite the new developments at 325 and 333 Mann St.
Ray White Commercial NSW is seeking interest from local, national and international buyers.
“Currently, Gosford is experiencing strong pre-sales for residential units being sold off the plan, which is beneficial for both developers and buyers seeking good value in the market for new units,” he said. 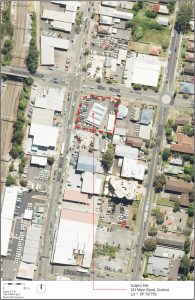 The Etna Street site for the 21-storey tower 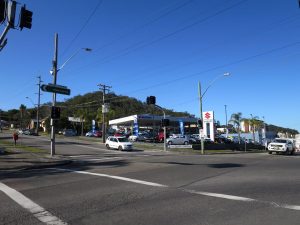 A street view of the site

JMGM currently has more than $120 million in developments in progress, with a focus on high-quality residential and mixed-use developments across Sydney and along the eastern seaboard.
The Ikon at 333 Mann St will comprise a single tower over a podium base that will include four levels of parking integrated into the fabric of the podium with one level partly underground, three levels of commercial tenancies, 17 levels of one, two and three bedroom residential apartments and landscaping.
The development was approved and achieved delayed commencement within the timeframe that enabled the developer to take advantage of the former Gosford Council’s 30 per cent bonus height and floor space controls.
As a result, the Gosford Local Environment Plan allowed for a maximum height of 78 metres and a floor space ratio of 6.5:1.
The proposed four-to-five-storey podium will accommodate four commercial tenancies with a floor area of 500 square metres that could accommodate various café and office premises.
Within the tower, 15 of the one-bedroom units will be adaptable for people in wheelchairs or other special users.
Each apartment will have direct access to a balcony or terrace with an area between eight and 12 square metres and residents will have access to landscaped communal open space at the level three podium and on the rooftop.
When the JRPP determined in favour of the development in December, 2016, it noted the corner location, site proportions, surrounding infrastructure, nature of adjoining development and proposed design measures resulted in a development that suited the site.
The consent was for two years from December 15, 2016.