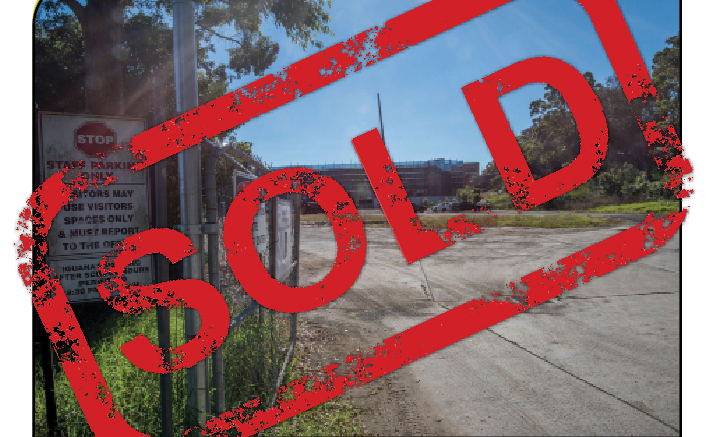 St Hilliers has paid over $9m for the remaining 1.1 hectares of the former Gosford Public School land Photo Noel Fisher

The NSW Government has announced St Hilliers as the successful proponent to acquire and develop the remaining 1.1 hectares of the former Gosford Public School site.
The remaining land was sold for $9.5 million.
NSW Minister for Finance, Services and Property, Mr Victor Dominello, said the announcement meant the State Government was a step closer to delivering its election commitment to relocate 300 government jobs to Gosford.
Property NSW confirmed sale contracts had been exchanged with St Hilliers and settlement was due towards the end of 2017.
Work on the mixed-use commercial building was expected to commence by the end of May.
“There is no timeframe confirmed for the development of the remainder of the site,” according to a Frequently Asked Questions document produced by Property NSW.
“There are no restrictions on any further sale of the land,” a statement from Property for NSW said.
“Any subsequent sale of the land would be a matter for St Hilliers,” it said.
Mr Dominello announced that the Australian-based property and construction group had been chosen to develop the site, which would include the new 7,000 square metre mixed-use commercial building at 32 Mann St.
“This is a big win for Gosford, and the project will provide the area with long overdue commercial development that will provide new jobs and economic stimulus,” he said.
“Not only will the development create construction jobs, but the building’s employees will engage with local traders, retailers and eateries, which is good news for small business.”
The mixed-use commercial building will accommodate public servants from the Department of Finance, Services and Innovation from late 2018.
The development is expected to create 90 construction jobs and more than 330 ongoing indirect jobs, and inject an additional $1.4m in retail expenditure to the Gosford CBD, and a further $4.2m to the broader region per annum.
St Hilliers has more than 20 years’ experience in major developments, including 155 Clarence St, Sydney, the Thornton Precinct in Penrith and Atelier at Kingston Foreshore, Canberra.
Property NSW said it would work with St Hilliers and the Central Coast Council to realise the Government’s vision for the site.
In terms of how Property NSW knows that St Hillier’s will deliver that vision, it issued the following statement: “As part of the detailed tender process last year, the successful proponent had to indicate how it would deliver on the NSW Government’s vision for the remainder of the site, including providing generous public open space, residential and retail and hospitality uses (cafes and restaurants).
“This formed part of the Property NSW evaluation process and is consistent with the Central Coast Council’s Development Control Plan for the site,” the statement said.
“The community will have the opportunity to comment on the DA of each subsequent phase of development of the site as it is proposed,” the FAQ document said.
The Gosford/Erina and Coastal Chamber of Commerce met with the NSW Government and St Hilliers.
Chamber President, Ms Alison Vidler, said it had been “a very successful meeting …discussing the future of the site, local jobs and the company’s history with the area, including the building of Kariong High School”.
According to Ms Vidler, the development had the potential to act as a catalyst to create ongoing economic and employment opportunities for the region.
This development will provide employment opportunities and support economic growth in the Gosford CBD,” Ms Vidler said.
“Workers will be using local suppliers, traders, retailers or eateries before and after work or during their lunch hours, which is good news for local businesses,” she said.
St Hilliers announced the success of its tender on its website, describing itself as the “successful proponent to develop a mixed-use precinct at 32 Mann St.
“The first stage of the development will comprise a new commercial office building, with subsequent stages of mixed use residential and retail offerings,” the website said.
St Hilliers described itself as an integrated property and construction group providing expertise and service in design management, cost planning, civil and building construction, refurbishment, property development and funds management.
“Our commitment to developing long-term, sustainable and collaborative relationships with our clients and our ability to deliver projects wherever our clients take us, has contributed to over 95 per cent of our business being through repeat clients,” the group’s website said.
An interview request from Coast Community News was referred back from St Hilliers to Property NSW.
The Expression of Interest and Request for Tender for the land were issued by Property NSW in the latter half of 2016 to seek private sector interest in delivering the DA building and develop the rest of the site.
“St Hilliers was selected following an extensive tender process,’ said the FAQ document.
It posed the question: “why did the Government seek to build on the old school site?” and responded: “As one of its 2015 election commitments, the Government committed to relocating at least 300 public sector roles from the Department of Finance, Services and Innovation to Gosford by late 2018.
“As the central agency responsible for management of the Government’s commercial accommodation requirements, Property NSW undertook a detailed assessment of the Gosford commercial market to determine existing and potential development sites able to accommodate the relocated staff by 2018.

“Due to a range of issues including size, location, quality and availability, no suitable existing or developable commercial sites were identified in the Gosford CBD with the exception of 32 Mann St.”
In response to the question, “Why isn’t the old school site being used for the Regional Performing Arts Centre (RPAC)?” the FAQ document said: “Although some members of the Gosford community called for construction of the RPAC on the site, Property NSW did not receive any formal approaches from the former Gosford Council or, subsequently, Central Coast Council, about purchasing the site for this purpose before the sale process started.
“In its submission for state and federal government funding to develop the RPAC, the former Gosford Council proposed development of the Centre at Gosford Memorial Park.
“Then on February 22, Central Coast Council nominated the Leagues Club Field on Georgiana Tce as its preferred location for the RPAC,” the document said.
The FAQ document confirms that none of the former school land will remain in public hands.
“The Government’s policy is to identify surplus and under-utilised sites that can be recycled to fund new and improved infrastructure and better services for the people of NSW,” the document said.
In terms of whether or not the local community will benefit from the $12.54m proceeds of the sale of the former school, the document said: “Proceeds from the sale of the first parcel of land to the Doma Group [$3.04m] went to the Department of Education’s capital program for reinvestment in Central Coast Schools.
“The proceeds from the sale of the second land parcel [$9.5m] will go to Restart NSW, a fund established by the Government to accumulate funds for reinvestment back into new and improved infrastructure”.
Restart NSW and the NSW Government’s commitment to providing financial support for a performing arts centre are not linked, according to the FAQ document.
“Restart NSW is a fund established by the Government to fuel economic growth by investing in infrastructure projects that have strategic and economic merit.
“These projects can be in either Sydney or regional areas.
“The Government’s commitments to providing $12m towards a RPAC and Conservatorium in Gosford is a separate initiative that recognises the importance of the arts in regional communities.”
The DA-approved office building was described as: “A new, six-storey 7,000 square metre mixed use commercial building that features an active street frontage and ground floor alfresco dining.
“These elements will ensure that the site is a vibrant and well-utilised extension of the Gosford CBD,” it said.
“The DA is consistent with both the NSW Government’s Central Coast Regional Plan and the State Government’s plans for revitalising the Gosford Waterfront precinct.
“The development of 32 Mann St is part of a broader NSW Government plan that will reinforce Gosford’s position as the regional capital of the Central Coast.
“The relocation of government offices to Gosford will help to activate the city centre and provide additional opportunities for job creation and economic growth in Gosford.
“On completion of the ATO and DFSI projects in late 2018, there will be in the order of 1,000 new finance sector jobs in Gosford.
“This provides residents with greater opportunity to live, and importantly, work in Gosford and on the Central Coast.”
Gosford Waterfront Alliance (GWA), the community group that opposed the adjoining Australian Taxation Office development, has been asked to comment on the sale of the remaining school land.