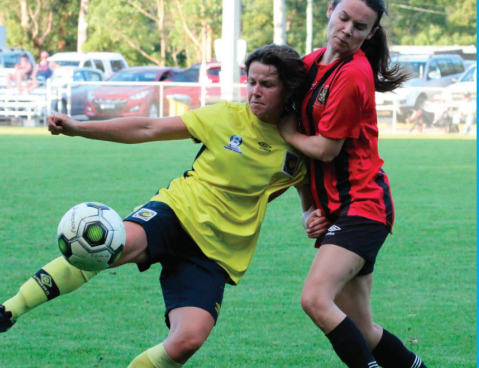 Central Coast Mariners Academy Womens side lost to Sutherland Shire by three goals to one at Pluim Park on Sunday, April 30, despite taking the lead inside the first minutes.

The Mariners came out full of confidence, and were rewarded when, after only 49 seconds of play, striker Candice Phelan found space and rocketed the ball into the back of the net. The Sutherland team refused to lie down and, through connecting play and pitch control, began to assert their dominance. In the 18th minute, they were rewarded when Jordan Baker bagged an equaliser, which saw the two teams go to the sheds at half time tied at 1-1. The second half started with end-to-end plays foiled by stoic and scrambling defence from both sides.

Ten minutes in, Jordan Baker found space and fi red past the fi ngers of Jess Schultz, earning her the second goal of the night. Sensing tired legs, Mariners Coach, Mr Mark Yule, injected Christine Granero, Jade Kroemer and Maddi Ryan into the game. The impact was positive, and the Mariners women looked dangerous, due to Gabby Blanch, who, from out wide, delivered quality balls into the Sharks’ goal area. The Sutherland defence was equal to the task, and in the 80th minute, the Sharks’ Danielle Wise scored, extending the away side’s lead. Mr Yule pushed young star Georgia Davis forward in a roving role to look for a gap. A late swerving long bomb by Davis fl ew just wide, and the Sharks shut down play to end the game 3-1 winners. Mark Yule lamented his side’s poor decision making but was able to find positives in their performance.

“Today we were second best too often to get a winning result,” he said. “We made it hard for ourselves turning over possession with poor passing and ball control. “There were patches of quality, but not enough. “We also need to raise our conditioning ahead of a tough couple of games ahead. “Special mention goes to, Letisha Waddell, for her uncompromising defensive contribution, and Jess Schultz in goals, was inspirational.” The Mariners WPL headed to Marconi Stadium on Sunday, May 7, to face an in-form Stallions team.