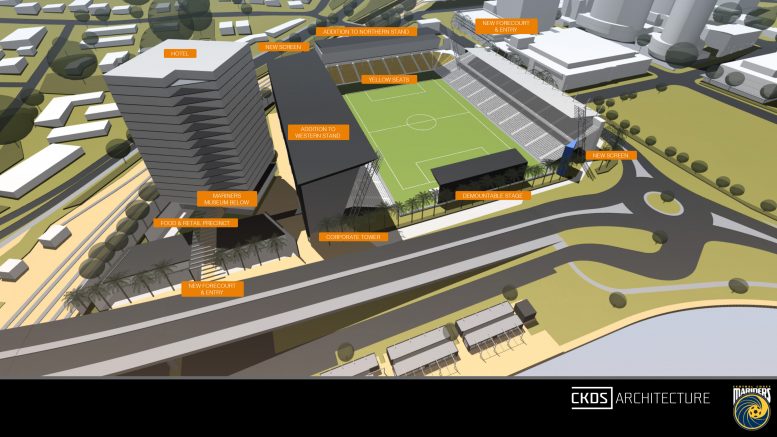 The Central Coast Mariners' proposal for the stadium

Owner of the Central Coast Mariners Football Club, Mr Mike Charlesworth, has used the occasion of the club’s annual medals dinner to call for politicians to support his plans for a $75m redevelopment of the Central Coast Stadium.
The Mariners’ Medal Dinner, held at the Crown Plaza, Terrigal, on May 12, was attended by the Federal Member for Robertson, Ms Lucy Wicks, Federal Member for Dobell, Ms Emma McBride and NSW Member for Terrigal, Mr Adam Crouch.
During his official address to the 370 guests gathered, Mr Charlesworth said he appealed to all the politicians present to support the Central Coast Mariners’ plans to redevelop the stadium.
He said he encouraged them to do their best to persuade Central Coast Council of the merits of the Mariners’ plans for the sporting venue on the Gosford waterfront.
“We can commit to doubling the number of events held at the stadium,” Mr Charlesworth said.
The Central Coast Mariners unveiled their vision for Central Coast Stadium in January and formally presented it to the stadium’s current owners and operators, Central Coast Council.
The vision was described as a bid to transform the venue into a world class entertainment hub.
At the time, Mr Charlesworth instructed the club to formally present a management rights proposal to Council, citing concerns that the existing business model did not facilitate best practice.
Central Coast Stadium was officially opened in February 2000 and has remained relatively untouched during its 17-years-of-existence which has resulted in the venue become dated and in need of immediate attention.
The Mariners’ five stage concept has been devised to ensure Central Coast Stadium meets stadium best practice and becomes a weather friendly, football friendly and digitally connected stadium that can facilitate Westfield W-League double headers and more.
Following the upgrades, Central Coast Stadium would be in contention to host concerts, bigger events and trade seven days a week through a café and retail precinct.
The main components of a stage one upgrade to Central Coast Stadium would include: dual big screens in the south east and north-west corners of the venue; weather/sun protection over the northern grandstand; yellow seats; additional change rooms; wi-fi compatibility; state of the art sound system; upgrade of the corporate facilities (including a 100-seat function room); and, a retail and café precinct
The Central Coast Mariners’ five stage concept also includes a hotel with unmatched views of Brisbane Water.
“I was delighted to be able to attend the Mariners’ Medal Dinner in Terrigal and firstly want to congratulate the Mariners on an outstanding evening,” State Member for Terrigal, Mr Adam Crouch said.
“I also want to acknowledge the passion of the team’s owner, Mr Mike Charlesworth, along with the professionalism of CEO, Mr Shaun Mielekamp and the dedication of Head Coach, Mr Paul Okon,” Mr Crouch said.
“There is no doubting Mike’s enthusiasm for the Central Coast and his vision for Central Coast Stadium is to be commended, and I would encourage him to continue to work constructively with Central Coast Council, both prior to and post the council elections in September this year, to ensure the best outcomes for the entire Central Coast community,” he said.
Ms Lucy Wicks, Federal Member for Robertson also offered her support.
“As a proud member of the Central Coast Mariners, I know the local community wants to see our great club growing and thriving both on and off the pitch,” Ms Wicks said in response to Mr Charlesworth’s speech.
“I’ve recently met with representatives from the Mariners to hear about their plans, and I committed to keep working with the club to assist from a Federal Government perspective where it’s appropriate,” she said.
“I know that all levels of Government and the Mariners have the goal of seeing the rejuvenation of Gosford happen as soon as possible.”
The Central Coast Council issued the following written statement in response to questions about Mr Charlesworth’s speech: “There are ongoing discussions with the Mariners about the future of Central Coast Stadium (there is no story here).”