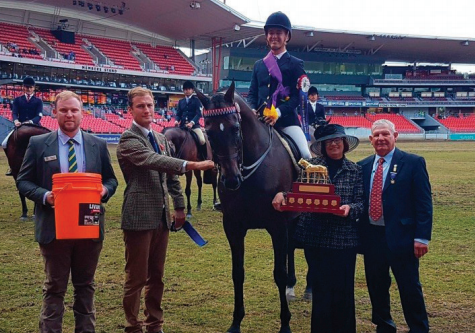 Mardi resident and horse enthusiast, Mr Josh Adams, found success at the 2017 Sydney Royal Easter Show, taking out The Stephen Joseph Memorial Perpetual Prize, for being the winner of the Open Gentleman Rider, 21 years and under 40 years Class, in the horse- riding judging event. Mr Adams is a seasoned rider with over 20 years’ experience.

He has been a previous prolific winner at the Sydney Royal Easter Show in riding classes, and the 2017 win qualifi ed Mr Adams to compete at the Show Horse Council Grand Nationals in March 2018. Mr Adams and his partner, Ms Jess Castle, run Mardi horse training business, Team J Show Horses, and between them have a highly successful career in the show horse industry.

This year has been shaping up to be one of the pairs’ most successful, with Ms Castle securing a fifth place at the Sydney Royal in the Open Hack classes with Vasari, as well as placing second in the Canberra Royal in February, and was also declared Champion Novice Hack at the Bathurst Royal. Ms Castle has been a Central Coast local all her life and said she had no trouble convincing Mr Adams of the region’s perks. “We both love living on the Central Coast, where we train our horses and client’s horses.

“We also give riding lessons to riders of all ages and levels, some of whom compete with us at shows. “We have a really great team of people that help us achieve our success, especially the fabulous year we have been having. “Especially Scott Adams, Josh’s dad, who drives us to all the shows and helps us in every way,” Ms Castle said.

The pair also owe Mr Adams’ parents much gratitude for Vasari, the horse with which both have enjoyed their success in 2017. “Vasari was a retired race horse when Josh’s parents rehoused and retrained him to be a show horse,” Ms Castle said. Mr Adams and Ms Castle have had Vasari since December 2016 and have since met all qualifications to compete at next year’s Royal Easter Show. The pair have since continued Mr Adams parent’s work, finding retired race horses and giving them a new lease on life as show horses. “Josh and I work so well together, each contributing different strengths to our partnership. “Josh and I both love finding retired race horses to bring on to become show horses and we have two other special horses at home just beginning their show careers,” Ms Castle said.