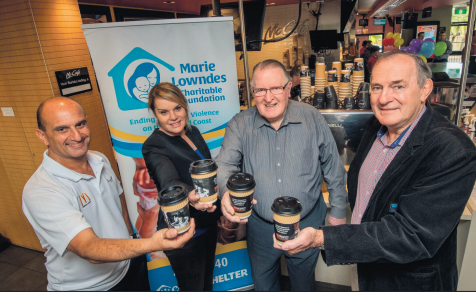 Coast Shelter, which runs refuges for women and children, has started a domestic violence campaign to “let people, who might be suffering in silence, know that there is help available”.

Chief executive officer Mr Laurie Maher said: “So far this year, 69 per cent of clients accommodated in Coast Shelter’s Women and Children’s Programs sought our assistance because of domestic violence and just over half of these clients were children.” Mr Maher said Woy Woy was one of four hot spots for homelessness on the Central Coast and that homeless numbers were higher than he had ever seen.

“Forty to 50 per cent of those who are homeless are women and children and domestic violence is the major cause,” he said. In addition to Coast Shelter’s own three refuges for women and children, one for domestic violence victims, one for men and five youth refuges, Mr Maher said Mary Mac’s Place at Woy Woy was currently serving over 100 hot meals per day. Mr Maher said women who were victims of domestic violence often relied on New Start allowance as their only income. “Average private rentals on the Peninsula are now around $300 a week and New Start doesn’t come near covering that so women have to decide whether to pay for the roof over their head or for the essentials like food and clothing.

“They know they can’t cover both,” he said. Coast Shelter’s Marie Lowndes Charitable Foundation provides domestic violence prevention, education and response programs. It has supported the awareness campaign. Mr Maher said that the campaign would take the form of a “coffee cup campaign”. The concept of a coffee cup campaign came out of discussions within Coast Shelter about the best ways to bring the problem of domestic violence to the community’s attention. The idea was to put wrap-arounds on takeaway coffee cups, displaying the 1800RESPECT (1800 737 732) helpline.

The helpline provides counselling, information and support to those experiencing domestic and family violence. Mr Maher said a request was made to Mr and Mrs Ron and Sandra Mussalli, who owned 14 McDonald’s stores across the Central Coast, selling more than 100,000 coffees a month. They agreed to deliver the message on coffee cups distributed throughout May, through their outlets, including at Woy Woy and Umina. “This is a very exciting opportunity for Coast Shelter and it is wonderful to have a number of local McCafes take part,” said of Coast Shelter.