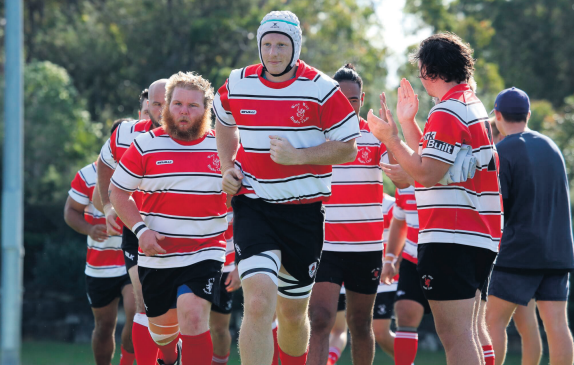 Woy Woy's 1st Grade Captain, Kane Burns, leading the team out in the Round 2 Match against Warnervale

Woy Woy Rugby Union coach John Stokie is confident the club is in for a successful season even though the First XV lost its two opening games.

“We are in something of a transitional period having lost a few players who have been mainstays over the last three seasons,” he said. “But we have shown enough in our games so far to know we will be very competitive as the season progresses. “We could have won both games against two quite strong sides, Kariong and Warnervale. “A little bit of inexperience and a couple of poor options cost us dearly. “On the credit side is that seven players from last year’s reserve grade premiers have experienced fi rst grade already. “These blokes are just realising they are genuine first graders. “Matty Graham at prop and Jack Dewar in the second row have been outstanding.

“In the backs, Blake Arahill, Corey Fleming and Zack DoakeStride are ex-juniors who have the potential to be mainstays of the future. “We also have some exciting new outside backs who have joined the club and they will give us plenty of scoring potential.” Much of the coach’s confi dence came from the fact that training the top two teams as a squad has brought a very close feeling within the group. “We’ve got young blokes learning every training session from the old hard-heads. “Rivalry for spots is keen,” Mr Stokie said. “We are all pulling in the same direction. “The newer boys are thriving on the experience.”

Early success in the minor grades has also pleased the coaching staff. Reserve grade won its fi rst two games, Third grade has won three from three and the under 19s have won two from three. Under-19s coach Nick Nikora said the Under 19s also train regularly with the fi rst grade squad. “As these youngsters get their chances through the season they will find it easy to fit in to the pattern of play,” Mr Stokie said. Woy Woy resumes with an away game against North Lakes on Saturday, May 6, and then play their fi rst home game at Woy Woy Oval on Saturday, May 13, against Gosford, a game which would give a real indication of how well their season was unfolding.

Train station to get facelift