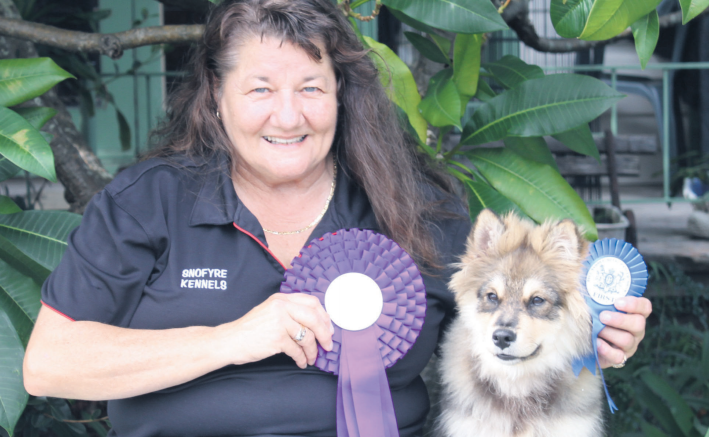 Ms Chrissy Fitzgerald of Umina has won the Best Baby Puppy of Breed title for her Finnish Lapphund Baby Puppy Bitch in the dogs section of the Sydney Royal Easter Show.

Ms Fitzgerald is a seasoned exhibitor at the Show and said she was thrilled with the result for her puppy Halley. “Dogs have been my passion for all my life,” Ms Fitzgerald said. “I’ve been showing dogs for years and I’m a dog groomer by trade, but Halley represents almost 10 years of planning and effort and I’m delighted with the result at the Royal. “She exceeded all my expectations. “When she was placed in the Top 10 out of the 309 entrants for the category and then went on to win the title, I was amazed and so very humbled by the experience,” Ms Fitzgerald said. Since the Show, Ms Fitzgerald and Halley have been competing at events across NSW, with the most recent being at the Deniliquin and District Kennel Club, which yielded three champion in show titles.

Their recent success sees Halley ranked third on Dogzonline’s Rising Star list. Brisbane Waters High School were also big winners at the Royal Easter Show, winning Champion Senior Boar of Show as well as the Grand Champion Purebred Heavyweight Steer. Riverglen Herman, the 260kg boar, is currently under the jointownership of the school and his breeders, Mr and Ms Richard and Heather Cole. Sheraton Skippy, the black limousin steer, 600kg, 14-month old Steer, fetched an impressive $8000 at the Show’s auction on April 6. Skippy was handled at the Show by Year 10 student Kynesia Stapelton. Mr Ron Unsworth and Mr Richard Mckay, the school’s agricultural department assistants, have been helping the students prepare cattle and pigs for the Show for 23 years. Mr Unsworth described Skippy’s win as the pinnacle of the cattle events at the show.

This article appeared first in the Peninsula News print Edition May 1, 2017