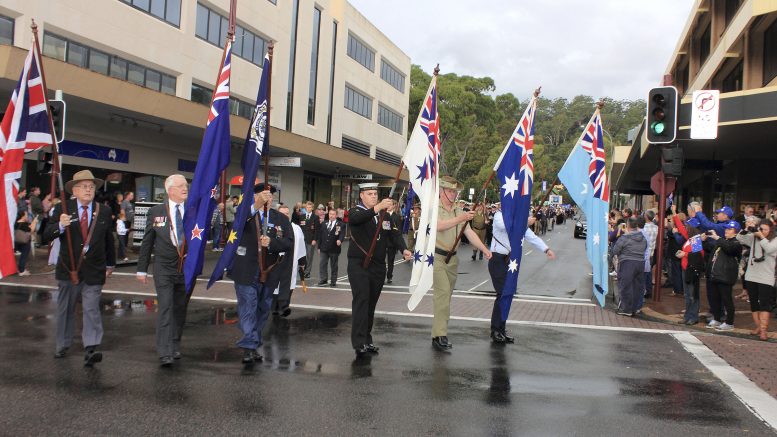 On April 25, RSL Branches around Gosford City will be holding a series of marches and services to commemorate Anzac Day.
As part of this year’s Anzac Day activities, a number of road closures will occur in Gosford City on April 25.
Terrigal Esplanade, between Campbell Cres and Kurrawyba Ave, will be closed from 5am until the conclusion of the Dawn Service at approximately 7am.
A southbound diversion will be in place on Terrigal Esplanade, diverting traffic entering Terrigal onto Barnhill Rd.
Access to South Terrigal will be via Grosvenor Rd and the Scenic Hwy.
It is recommended that boat users heading to Terrigal Haven utilise Charles Kay Drv and the Scenic Hwy route to avoid these closures.
In addition, road closures will be in place at Woy Woy, Gosford and Empire Bay.
Donnison St and Mann St, Gosford, will be closed for the main Anzac march from 10am.
Access to Mann St from Masons Pde will be closed, with all traffic diverted into Dane Drv until approximately 1pm.
While the service is conducted, all traffic travelling south on Mann St will be diverted into Vaughan Ave until approximately 1pm.
Breakers Country Club members will attend the Dawn Service at Terrigal Beach, after which they will host their own service from 11am at the club, followed by a free performance from Australian Bush Band, the Frohlich Bros from 1pm-4pm.
Davistown RSL Club will hold its Dawn Service from 6am at the Club’s Memorial Wall, with entertainment by Jim Gannon Duo in the Club’s backyard and two up in the auditorium afterwards.
Gosford RSL Sub-Branch will assemble near Gosford Police Station at 5:45 and shortly afterwards march to the Cenotaph for a 6am service.
A courtesy bus is available for this service but bookings are essential.
Breakfast will be served after the service from 6:15am-7:30am.
The main march will assemble in Donnison St from 10am and march along Mann St to the Cenotaph by 11am for the service.
Two up will be played at the club from 1pm.
Terrigal-Wamberal RSL Sub-Branch will march from Church St to the Terrigal Beach Memorial for the 5:30am Dawn Service.