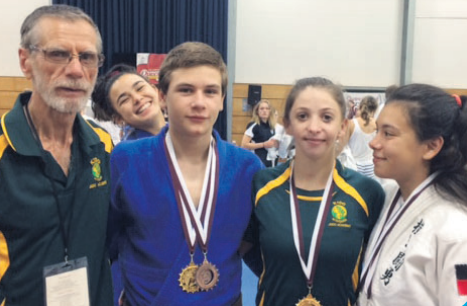 Caroline Hain was on a winning streak to secure her second International Women’s Gold in the 48kg division in as many weeks. Daniel Villani found himself competing in a heavier weight and age division. He showed great confidence due to his strong training preparation, leading him to a Gold medal. Danny Vojnikovich faced a big challenge in a large under-55kg senior boy division. He managed well in the preliminaries employing his newly-modified shoulder throw. Angelina Yokoyama won a medal in both areas competing in the under-57kg junior and senior categories.

“Six medals is tremendous,” said Mr Pete Acciari, Kido Head Coach. “This Queensland competition was an improvement on the four medals obtained at the ACT competition, for all players. “The four are role models for our new young beginners’ classes, where they help out regularly; therefore all the players at Kido Mingara Judo Academy win,” he said. Daniel Villani’s commitment and hard training earned him one of the six spots on the two week European tour and entry in two events.