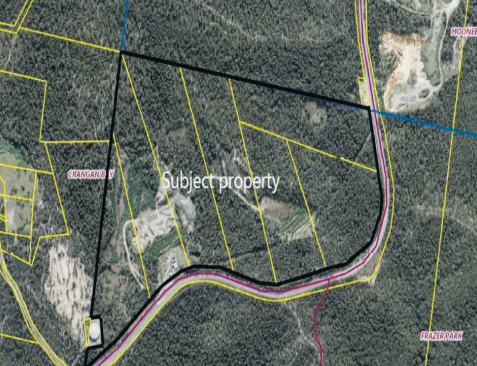 A request by the owner of Crangan Bay Quarry to rezone 79 hectares of land, was expected to be declined by Central Coast Council at its ordinary meeting on April 26.

Other reasons given for the recommendation to decline the rezoning request included that “No strategic planning investigative reports have been submitted to Council to inform the proposed rezoning. “RU1 Primary Production is not an appropriate zone for the site, as this land is not suited for any rural activity other than the current existing use,” the report said. “Rezoning to RU1 Primary Production would create an isolated pocket of rural land.

“The current enabling clause permits the continued operation of the existing quarry and the ability to expand the quarry with development consent. “This is also permissible under the Mining, Petroleum Production and Extractive Industries State Environmental Planning Policy (SEPP) 2007; and the site is environmentally constrained and located within the future green corridor. “This constraint should be recognised as part of the land zoning and potential land uses permitted on the site.

“The ongoing use of the site as a quarry is not at risk and is protected by a number of planning instruments,” the report to Mr Reynolds said. The report also recommended that Mr Reynolds write to the landowner to advise that any future request for rezoning the site should occur through lodgement of a planning proposal in accordance with Council’s planning proposal procedure. According to the report to Council, since 1969, the site has been used for gravel extraction, with the first development consent for a quarry granted in 1977. Consents to extend the quarry use were granted in 1983 and modified in 1984 and 1992, and permitted under former development zones.

The site was converted to E3 Environmental Management under WLEP 2013 on December 13, 2013, based on the recommendation that all land East of the Motorway that did not contain a caravan park or mobile home estate, be zoned E3. “The landowners… have made numerous requests to Council over a number of years seeking an alternate zone for their site,” the report to Mr Reynolds said. According to the report, in February 2015 the Premier and Minister for Planning provided “correspondence to the landowner clarifying that the conversion of zoning of the site to E3 Environmental Management with the inclusion of an enabling clause to allow extractive industries was considered reasonable.”

In February 2016, the former Wyong Council resolved to defer making a decision on a major amendment to WLEP 2013 which included a submission by the owner of the quarry.

Quarry seeks approval for 2,250 truckloads of fill per week for four weeks