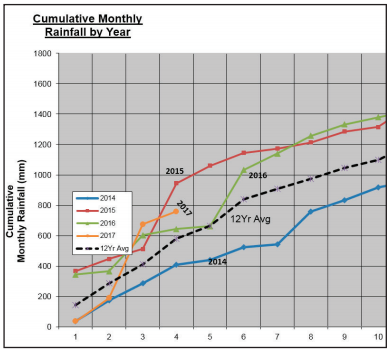 The Peninsula on the Central Coast’s rainfall rate returned to average in the first two weeks of April, following all-time highs in March.

A total of 83.4mm has fallen in the fi rst two weeks of April, around half the average for the whole of April of 170mm, according to fi gures supplied by Mr Jim Morrison of Woy Woy. The total for the year, as at 9am on April 13, was 758.2mm, 30.5 per cent more than the average cumulative total at the end of April. More than half of the rainfall this year was recorded in March. The March total of 485.2mm accounts for almost two thirds (64 per cent) of the rainfall this year. The March figure was almost four times the March average of 123mm.

Dye-ing for a new look?