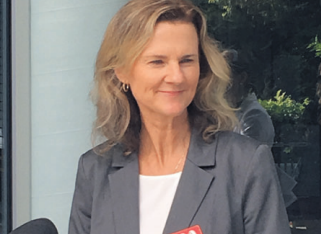 Jilly Pilon at a by-election press conference in Gosford

Premier Gladys Berejiklian joined Liberal candidate for the seat of Gosford, Ms Jilly Pilon, to announce a $23 million roads package for the Central Coast on March 22.
The projects to be funded as part of the NSW Government package include: $8 million to install new traffic lights on Koolinda Ave and Jirrah Ave, and create right turn lanes on Sunshine Dve and Sunnyside Ave, Point Clare; $2 million to improve safety along Brisbane Water Dve around Point Clare Public School, including the installation of safety barriers and pedestrian fencing near Talinga Ave and Takari Ave; and, $13 million to continue planning to improve Blackwall Rd and Memorial Ave between Maitland Bay Dve and Victoria Rd, Ettalong.
The Brisbane Water Dve upgrade will improve safety for children around Point Clare School.
“I’m pleased to also announce today that on top of this upgrade, Roads and Maritime Services has approved a school zone for Point Clare,” Ms Berejiklian said.
“We have listened to the concerns of parents and will ensure this project is delivered,” Ms Pilon said.
The Blackwall Rd upgrade would help ease traffic congestion.
Drivers are travelling at less than 60 per cent of the posted speed limit during peak times.
The $23 million package also includes funding to investigate options for a pedestrian footpath between Collard Rd and Jirrah Ave, with work set to start soon.
“The NSW Government is committed to improving the road network and the safety of pedestrians, cyclists and motorists, and these projects are crucial for the Central Coast,” Ms Berejiklian said.
The Koolewong and Point Clare-Tascott Progress Association have welcomed Premier Berejiklian’s $23 million Central Coast roads upgrade package and Association honorary secretary, Ms Helen Orchard, said that there were several big wins for the community in the package, but said the Association is concerned over the lack of a designated location for the promised school zone.
“The Koolinda Ave, Jirrah Ave, Sunshine Dve and Sunnyside Ave works are a big win for the Association, in particular for member Ms Jenny Carney, who took up a petition and painstakingly liaised with sporting bodies, scouts, girl guides, Fagan Park users, Orana Nursing Home, Fairhaven Services and surrounding residents in 2016 to have lights moved up to the intersection of Koolinda and Jirrah for use as traffic lights,” Ms Orchard said.
Ms Orchard also said that the $2 million in funding to improve safety along Brisbane Water Dve, Point Clare Public School, Talinga Ave and Takari Ave is another big win for the community, but questioned whether this funding would come in addition to previously promised funds intended to improve safety on Brisbane Water Dve.
“Former Member for Gosford, Mr Chris Holstein, and Roads Minister Duncan Gay, promised $2 million in funding prior to the 2015 election for the corner of Penang Ave and Brisbane Water Dve.
“This funding was diverted for use for expenses on the Brisbane Water Dve route study by the RMS.
“This raises the question, are we getting an additional $2 million in funding?
Ms Orchard also questioned whether or not the mentioned footpath for Brisbane Water Dve would mirror residents’ wishes and run on the Koolinda to Lorraine Ave side of Brisbane Water Dve as requested in the Associations RMS community meeting in August 2016.
“Having the footpath on the Koolinda / Lorraine side of Brisbane Water Dve would allow parents to accompany their school children across Brisbane Water Dve from the Fagan Park side and children would not have to cross busy Brisbane Water Dve again to access Point Clare Public School,” Ms Orchard said.
“We hope that all funding election promises by all parties standing will be honoured no matter which party takes out the By-election on the April 8.