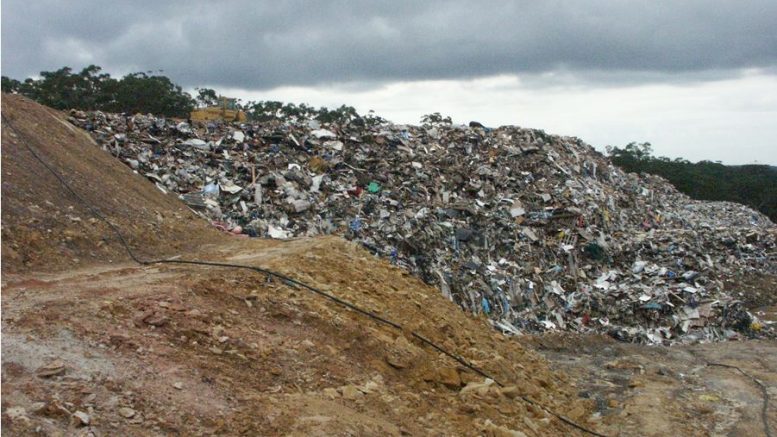 Some of the pile of general waste at Mangrove Mountain

NSW Shadow Minister for Environment, Ms Penny Sharpe, has called on State Parliament to act on the Mangrove Mountain landfill.
Ms Sharpe traced the origins of the site as a community golf proposal to its current standing as a waste facility that threatens to contaminate the region’s water supply.
She said it left many questions unanswered about how facilities were approved and monitored and how development consents were modified through changed consent conditions.
“The history of the Mangrove Mountain Landfill site starts very innocently in 1998 when the former Gosford City Council approved a development consent from the RSL to remodel the Mangrove Mountain Golf Course,” Ms Sharpe said.
“A limit of 80,000 cubic metres of fill as a waste facility was set in an area regulated by an environmental protection licence to turn the nine-hole golf course into an 18-hole golf course.
“Because clean landfill was to be used for a specific purpose, there was no need to place a leachate barrier or collection system under the waste.
“There was also a series of conditions placed on the development approval and a licence was required from the Environment Protection Authority (EPA).
She said the first licence from the EPA was issued to Planet Earth Support Company in November, 2001, however the conditions to develop a leachate management plan and to install a leachate barrier system and a leachate collection system did not occur.
She said further modifications to the environmental protection license between 2001 and 2012 eroded the environmental controls until the site had taken more than 10 times the original amount of waste approved to be dumped on it.
Ms Sharpe said there were fears in the community that the current size of the site could contaminate the Central Coast’s water supply.
“The Mangrove Mountain Landfill site sits on a permanent watercourse and the groundwater aquifers in the catchment of the Central Coast drinking water supply.
“It is a giant mound—not of clean fill, but of a range of waste that never should have been allowed to be there in the first place.
“This landfill site is producing an estimated three million litres of leachate annually, much of which flows into the catchment of the Ourimbah Creek system and into significant groundwater reserves.”
Ms Sharpe said the Mangrove Mountain Landfill had another significant problem.
“Eight-five per cent of the existing waste mound is unlined because, remember, it was supposed to be clean fill for a golf course and the 15 per cent of the lining that is there is ineffective and does not meet current standards.
“Despite all these problems, in 2014 current planning approval was given, won in the Land and Environment Court, that will allow the operator to dump a further 1.3 million cubic metres of waste, meaning the total amount of rubbish will expand to 2.2 million cubic metres, or 25 times what was originally envisaged for this site.
“We need to pay attention to the words of Dr Stephen Goodwin from the Mangrove Mountains District Association, who said, “The Mangrove Mountain landfill is flagged to be further expanded but it doesn’t comply with its development consent, is at odds with the environment guidelines for New South Wales solid waste facilities and, in addition, has failed to comply with its environment protection licence conditions on numerous occasions.”