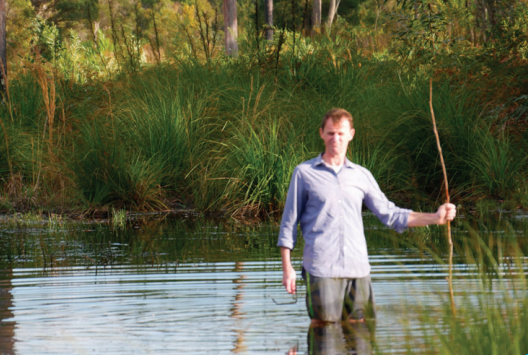 David Mehan, Member for The Entrance, standing in localised fl ooding at the proposed train maintenance facility site that is also the habitat of an endangered toadlet

NSW Minister for the Environment, Ms Gabrielle Upton, has refused to protect the environment at Kangy Angy, according to Member for The Entrance, Mr David Mehan.

Mr Mehan said he wrote to Ms Upton on March 15 regarding the impact of the proposed rail maintenance facility on environmental conservation zoned land at Kangy Angy. He received a response from the Minister on April 6, communicated by her chief of staff, referring the matter of any environmental impact of the proposed development to the Transport Minister, Mr Andrew Constance. “The Minister responsible for protecting the environment in NSW is not interested in protecting the environment at Kangy Angy,” Mr Mehan said.

“I have said all along that this railway facility is needed on the Coast,” he said. “However, there are better locations for it on the Coast, where the environmental impact would be minimal when compared with Kangy Angy. “It is disappointing that the Environment Minister has washed her hands of getting a better outcome for the Coast.” In particular, Mr Mehan’s letter to Ms Upton, called to her attention to the gazetting of the Mahony’s Toadlet as an endangered species. Mr Mehan said the species was found in the project area.

He said he last visited the site in January, before recent heavy rains, and was able to wade into ground water up to his thighs. “The project site is a wetland and floodplain and the huge quantity of fi ll required to create a building platform will seriously impact the Toadlet’s environment,” he said. “I ask that you give serious consideration to the impact of the project on the Toadlet when you make your fi nal determination,” Mr Mehan’s letter said.