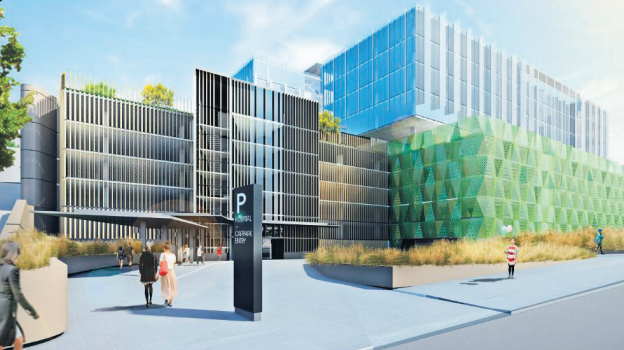 The Central Coast Medical School and Research Institute, announced by Federal Member for Robertson, Ms Lucy Wicks, during the 2016 Federal election campaign, is being developed by a partnership between UON Central Coast and the Central Coast Local Area Health District. Dr Glenn said the building was expected to be completed in 2019, and occupied by the fi rst intake of medical students and fully operational by 2020. The total funding for the school and institute was $72.5 million: $32.5 million from the Federal Government; $20 million from UON; and $20 million from the NSW Government.

“Gosford Hospital is being redeveloped and in that redevelopment, in consultation with the university, we have agreed to transfer 30 commencing medical student places each year to a total of 150 over fi ve years,” Dr Glenn said. “We have an additional 400 students in allied health to focus on the contemporary integrated care needs of the region,” he said. “The Local Health District understands that it has population growth and changing demographics, and so it understands the future workforce that is needed to service that population.” Dr Glenn said the Medical School will have an approach to care that focuses on the patient.

“The idea is to provide a process to address the patient’s needs without having to default to the GP or go into hospital. “The idea is that we would work with a range of health practitioners, and that could include the GP, a physiotherapist, a psychologist, and so on, but the patient is at the centre of it. “Instead of building more hospitals, we change the way we deliver care. “We can’t just keep building hospitals in Australia, it is just too expensive.

“We need to reduce the burden on the existing infrastructure by putting new care models in place. “A lot of the medical curriculum will be informed by the needs, as we understand them, of the Central Coast population, but we will also need to be able to translate research very quickly to the medical bed,” Dr Glenn said. He said that is where the Research Institute will come into play, by “working at the pointy edge of some sub-disciplines and will be able to train workers immediately.” Based on the region’s demographics, the Research Institute would focus on the younger and older cohorts of the population that are dominant. “Not exclusively, but a strong flavour of those will be identified. “The medical school and the research institute will be regionally focused but globally engaged. “The medical education will be integrated with the translational research and the whole enterprise will be energised by UON’s global reputation. “It will be guided and supplemented by an international advisory board,” he said.

That advisory board will include the likes of Dr Nick Goodwin, Chair of the Association for Integrated Care in the UK. “Some incredibly big, heavy hitters have agreed to assist in the development of the Institute,” Dr Glenn said. “It means that some of our graduates and undergraduates can spend time in other parts of the world to inform health best practice. “The Central Coast Local Health District estimates it needs around 900 new staff over the next decade, given the expansion of Gosford and Wyong hospital, and we believe all of that, through our new degrees around integrated health, can be delivered.

“In addition to that, Ms Wicks is also chairing a health taskforce group which was established by the Coalition Government to see how we can further exploit these developments and bring further expertise around the health space to the Coast, including companies that work in data analytics, manufacturing of small medical appliances, and bringing a new supply of GPs into the Coast.” Dr Glenn said he believed the Institute and Medical School would become “Centres of Excellence. “They will occupy 9,000 square metres of floor space within two signifi cant multi-storey buildings, and they will sit over the car park that is being constructed now.