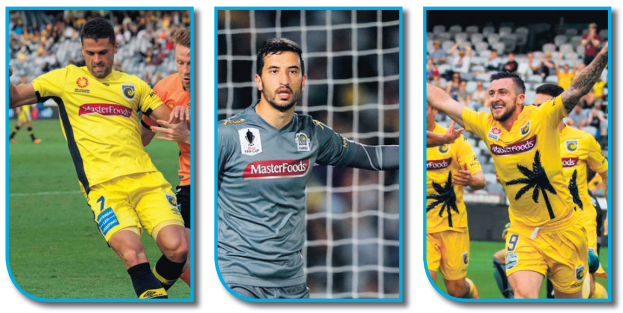 Izzo and O’Donovan will depart the Central Coast upon the expiration of their contracts which run until May 31. O’Donovan has spoken about his exit, expressing his gratitude towards the team and the time he spent with them. “I can’t thank everyone involved with the Mariners enough, I do not have a bad word to say about the Central Coast Mariners, I’ve loved my time here.” O’Donovan said. “It’s a shame we couldn’t have experienced more success, but I wish the club every success moving forward and I mean that from the bottom of my heart.” Izzo also thanked the Mariners for his two seasons with the team. “It’s very tough for me to leave the Mariners,” Izzo said.

“This season we’ve seen how good things can get at this club and how good they can be, so it was a hard decision [to leave].” Ferreira signed with the Central Coast Mariners in January 2015 from Adelaide United and has made 105 Hyundai A-League appearances across his time with both clubs, scoring 28 goals. The 27-year-old Portuguese attacker will depart the Central Coast Mariners immediately to embark on the next step of his football journey which will see him leave Australia and the Hyundai A-League. In Ferreira’s fi rst season with the club he claimed Mariners’ joint Golden Boot honours and on his departure from the Central Coast Mariners Centre of Excellence, reflected on the great memories made in Yellow and Navy.

“This is a good opportunity for me, but at the same time, it’s sad because I love Australia and the Mariners have been very good to me,” Ferreira said. “The club, the fans, the office, the coaches, the players and everyone have been great, so it’s mixed feelings right now. “The people here on the Central Coast have been amazing since day one. “The fans and supporters have been amazing so I am really going to miss everyone. “I want to take this opportunity to say thank you to everyone who has supported me during my time at the Mariners. “The club and its fans have always been there for me and for the team.

I will be forever grateful for that and good luck to the team for the upcoming season and in the future. “You never know what can happen in football,” Ferreira said. “I will go now and I may come back in one, two or three years. “This is another opportunity for me, but I love Australia, it’s a great country, and I can see myself one day back here,” Ferreira said. Central Coast Mariners CEO, Shaun Mielekamp, thanked Fabio for his service to the club and wished him all the best.

“Fabio has been tremendous for our club, not only on the pitch, but in the community,” Mr Mielekamp said. “Whilst on one hand it is sad to say farewell, we can only be positive and excited for him with the opportunity that he has created for himself overseas. “He has set a high bar for the next player to reach and along the way shown some of the great young talent coming through what can be achieved. “I know that every Mariners’ member will watch the journey for Fabio with great interest as he continues his career overseas. “In saying farewell, we wish him all the best, and my comment to him today was that the door is always open and he is always welcome at this club. “Fabio or La Flecha is, and always will be, known as a Mariner,” Mielekamp said.

Head coach, Paul Okon, has wished O’Donovan and Izzo the best. “Last season was a tough year, but credit to Izzo, as he responded in the right way, working hard in pre-season and got his reward,” Mr Okon said. “O’Donovan has been an important player for us this season and it’s disappointing to see him leave,” he said.

Too little, too late from Mariners