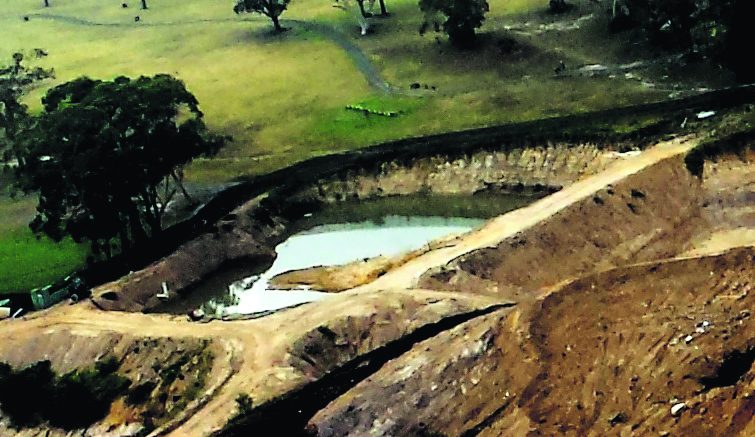 A leachate pond on the landfill site showing two exit pipes in the bank, upper one (circled in red) allegedly used for discharge

The Mountain Districts Association (MDA) has made a fresh demand for a forensic investigation into Mangrove Mountain Landfill.
MDA spokesperson, Dr Stephen Goodwin, said he had written to Central Coast Council Administrator, Mr Ian Reynolds, asking him to commit to a thorough investigation of the circumstances surrounding Mangrove Mountain Waste Landfill as a matter of urgency.
Dr Goodwin said: “This is a very complex matter that cannot be glossed over, nor would we expect it to be dismissed by convenient legal opinion acting in the interests of Central Coast Council, as has been the case.”
“The Mangrove Mountain waste landfill is producing three million litres of toxic leachate annually that is going into the groundwater aquifer and catchment of the Central Coast water supply.”
“This is a risk to the health of all residents on town water supply on the Central Coast that cannot be allowed to continue.”
“There needs to be an inquiry to determine who was responsible for this mess and to announce a course of action to have the site closed down and remediated,” he said.
“We agree with the NSW Premier”, Ms Gladys Berejiklian, who, when commenting on the former Gosford Council’s financial mess, was reported as saying: ‘Throw the book at anyone who has done anything illegal or wrong”.
“If an inquiry into the Mangrove Mountain waste landfill mess identifies culpability on the part of Council or any other party, then Council and other parties should accept that responsibility and deal with it.”
“If appropriate we would expect this matter also to be referred to ICAC,” Dr Goodwin said.
In relation to the ongoing investigation of the former Gosford Council’s finances, Dr Goodwin said: “Central Coast Council has demonstrated that it can exercise the necessary detailed level of investigation if called upon.”
“It showed this when it reported at a recent extraordinary meeting of Council on the results of a forensic examination of the books of the former Gosford City Council as part of its statutory obligation.”
“Price Waterhouse Coopers was appointed external auditor responsible for auditing the financial reports of the former Gosford City Council for the 2015-16 reporting period required by the Local Government Act.
“In the Financial Report presented to Council, it stated that the assets, rights and liabilities of the former Gosford City Council have been transferred to Central Coast Council.”
“In speaking on this matter at a Residents Forum at Central Coast Council on Monday, March 13, Dr Goodwin asked why Council had resisted opportunities presented to it by MDA to undertake a similar forensic approach into the Mangrove Mountain waste landfill.”
“Unfortunately, it would seem that Administrator, Mr Ian Reynolds, has a poor grasp of the complexity of this issue,” Dr Goodwin said.
“He is either being ill advised or is not seeking advice.”
“In an interview with Central Coast ABC breakfast host, Mr Scott Levi, on March 2, Mr Reynolds said that Council was meeting with the EPA that day to discuss the results of an independent Environmental Review of the Landfill and that he would be interested in the outcome of that meeting with a view to getting a resolution of the issue.
“When presented with the fact that it was now known that the Land and Environment Court Order of 2014 could not be implemented, Mr Reynolds responded by saying that ‘The independent report may well go into those issues’.
“It was disappointing to hear him say that, because the Environmental Review being conducted by an independent consultant is an entirely different matter to the difficulties with the Court Order and if you look at the Court Order as it stands, there are other steps that Council should be considering as well.”
“MDA first met with Mr Reynolds and Chief Executive Officer, Mr Rob Noble, in August, 2016, and they gave the impression that they would take this matter seriously.”
Evidence to date is that this is not the case and that they appear to have no intention of doing anything.
“They are playing Russian Roulette with the health of residents,” he said.
“Evidence for this claim came in a response from Mr Noble to a 45-page letter and supporting evidence that the Land and Environment Court Order 40900 of 2012 could not be implemented.
“Mr Noble said: ‘Council’s current position is that it will not seek to re-open the proceedings 40900 of 2012’.
“’Council will continue to review its position.”
Dr Goodwin said the MDA’s concern was that as far as Council decision-making was concerned, Mr Reynolds was the Council, and the Mangrove Mountain Waste Landfill issue needed his intervention now.
He said MDA had repeatedly expressed its willingness to meet with him to discuss the terms of reference for an investigation with a view to getting a resolution.
“Mr Reynolds has had a report on Council’s meeting with the EPA for three weeks and has announced nothing to date.”
In a written statement Central Coast Council said: “Council can confirm the EPA is currently working with an independent consultant who is undertaking a technical review of the revised Landfill Environmental management Plans for the Mangrove Mountain landfill.
“Council has been consulted on the proposed changes to the landfill Environmental Management Plans.
“Council is expecting to receive the final report and recommendations from the EPA by the end of March.
“Council understands the MDA has also be briefed by the EPA on the report.”