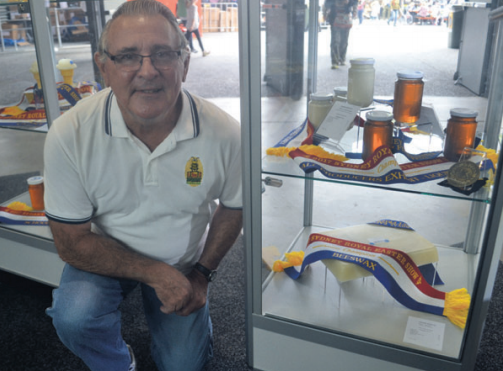 The 2017 Royal Easter Show was abuzz with Central Coast talent with local beekeepers dominating the Show with the best that the Central Coast had to offer.
Top honours went to Mr Len Verrenkamp and Mr Max Rae, of Bee-U-tiful Honey, who entered 12 categories and brought home three first place, four second place and three third place medals, which saw the Matcham based duo swarm the title of Supreme Champion in the Liquid Honey Light Eucalypt Category and snag the grand title of Overall Most Successful Exhibitor.
Mr Verrenkamp and Mr Rae have hives across the Central Coast and have been producing award winning honey for the region for years, having also secured titles at the Easter Show in 2015 and 2016.
Honey’s dynamic duo are also the president and secretary of the Central Coast Amateur Beekeepers Club which also produced the winner in the beeswax categories, Mr Raymond Isaacs, the club’s treasurer and Davistown’s honey hotshot.
Mr Isaacs secured the titles of Supreme Champion in both the white and yellow beeswax categories in the 2.5kg plus white beeswax class.
Mr Isaacs won the same title at the 2016 Easter Show and said he was keen to continue his streak.
“It is very gratifying to win in a year that has seen Central Coast beekeeping celebrated,” Mr Isaacs said.
Mr Isaacs has been beekeeping and producing honey products for seven years.
He has 15 hives at his Davistown farm and has sold his honey, A Bee C Honey, locally for some time.
“The Coast has done extraordinarily well this year at the show and I feel privileged and gratified to have won for a second year in a row for my beeswax.
Honey was not the only sweet treat bringing the Central Coast accolades this year with local bakers Ms Leeanne Dyer and Ms Jo-anne Wright taking out Most Successful Exhibitor Titles in perishable and non-perishable cake categories respectively.