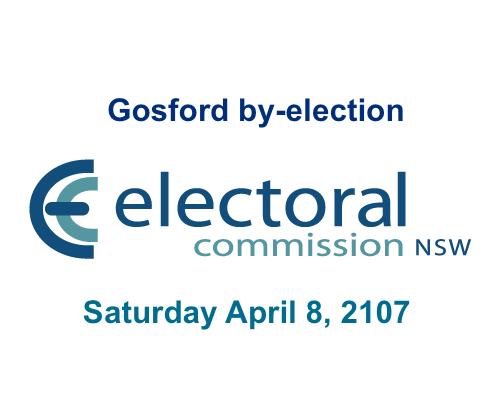 The by-election for the Gosford electorate takes place on Saturday, April 8.
The State Seat was vacated by Labor MP Ms Kathy Smith due to illness, triggering the by-election.
One of the most marginal seats in the state, Gosford was narrowly lost by former Liberal MP Mr Chris Holstein in 2015, before it was picked up by Labor.
Ms Smith suffered from ill-health for the majority of 2016, and announced her resignation in February 2017.
Prior to Mr Holstein, the seat was held Ms Marie Andrews for Labor from 2007 to 2011, when a change in electoral boundaries saw the disappearance of the Peats electorate, which had covered the Peninsula.
The Gosford electorate had previously not included the Peninsula.
Peats had been held since 1995 by Ms Andrews, and by Labor since its inception in 1973.
The electorate of Gosford is now 867.15 square kilometres and covers postcodes 2083, 2250, 2256, 2257 and 2775.
Early voting for the by-election is available at the Clock Tower Building in Woy Woy from Monday, March 27, to Friday, April 7.
Early voting opening hours are 8am to 6pm Monday to Friday, 8am to 8pm on Thursday, April 6 and 9am to 5pm on Saturday, April 1.
Voting locations on election day include Booker Bay Pre-School, Brisbane Water Secondary College Umina Campus, Brisbane Water Secondary College Woy Woy Campus, Ettalong Public School, Patonga Progress Hall, South Woy Woy Progress Association Hall, Umina Community Hall, Umina Public School, Umina Uniting Church and Woy Woy South Public School.
The polling locations will be open from 8am to 6pm on Saturday, April 8.
There are six candidates standing in the by-election on April 8.
Each candidate has submitted a 250 word statement which appear in alphabetical order over the following pages.

Full information at the official by-election for Gosford website.