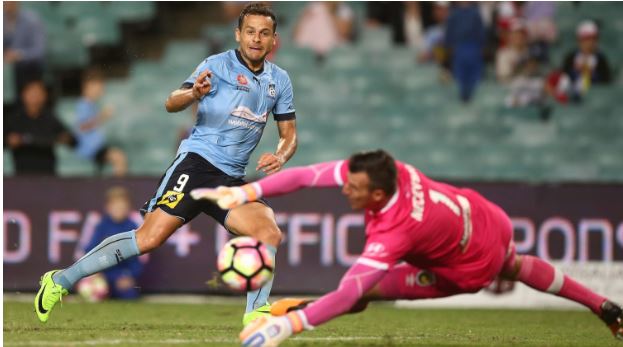 Ivan Necevski pulling off a one on one save against Bobo

The Central Coast Mariners have suffered their 13th loss of the season, this time to Sydney FC, thanks to an early goal from Filip Holosko in the eigth minute.
The Mariners were hoping to start off strong, but were dealt a blow early in the first half, when a pinpoint cross from Sydney FC left back, Michael Zullo, found its way to Holosko, who was able to volley the ball in from close range.
Mariners’ Coach, Mr Paul Okon, showed his dissatisfaction of the condition of the pitch.
“I think if you’re going to deliver a pitch like that, you’ve got bigger problems; that was embarrassing, I don’t think the game should have been held to be honest,” Mr Okon said.
“I don’t think there was too much football played through the centre half of the pitch,” he said.
The Mariners were outclassed by the league leaders and struggled to register an attacking threat, with Kwabena Appia coming the closest on the night, after seeing his tame effort land straight to the gloves of Sydney keeper, Danny Vukovic.
Ivan Necevski was hoping to cement his place as first choice goalkeeper after Paul Izzo was suspended after last week’s red card, and gave Paul Okon a welcomed selection headache, putting in a man of the match performance, as he kept the Mariners in the game, pulling off a variety of saves to keep the deficit at 1 to 0.
Necevski was able to pull off a stunning one on one save to deny Sydney FC striker Bobo, thanks to the quick reflexes of the Former Sydney FC veteran goalkeeper.
Sydney FC midfielder, Brandon O Neil, was hoping to increase the Sky Blues’ lead after his team were awarded a free kick in front of goals.
However, O’Neil’s curling free kick effort was saved by the outstretched arm of Necevski.
Things didn’t go too well for the Mariners, and they only seemed to get worse when Liam Rose brought down former Mariner, Bernie Ibini, and received a yellow card and Sydney were awarded a penalty.
Bernie Ibini stepped up to take the penalty, however Ivan Necevski was able to save the shot, after Ibini’s timid shot was guessed correctly by the Mariners’ Goalkeeper.
Mr Okon praised his side’s valiant effort against the potential premiers, and praised Sydney FC’s defensive structure.
“Sydney is the best structured team when they don’t have the ball.
“It was always going to be difficult to make our way forward”
The loss sees the Mariners sit at ninth place, with 20 points on the table.
“In the off season, we will assess our year and make the necessary decision where we believe we will strengthen.”
“I said at the start that every player at the club will be given an opportunity.
“We have a number (12) of players off contract and in the coming weeks we’ll look at what needs to be done.
“I can guarantee we will be better next season, we will definitely be more competitive which is the minimum for us, said Mr Okon.