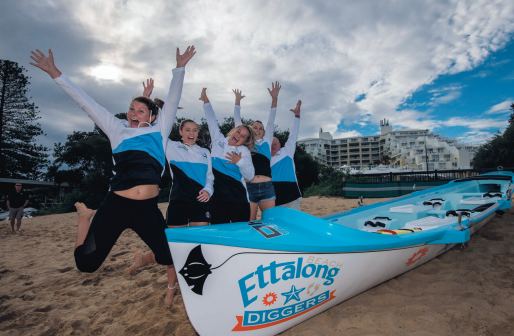 From front Meagan Langford, Jess Thomas, Priya Johnson, Grant Stringer with the new boat on the beach in front of Ettalong Diggers

The new boat was dedicated to the Coffey family. Ms Meagan Langford, a member of the women’s rowing team, said: “The Coffey family were a large influence in the club.” Club members picked up the new $30,000 boat from the Queensland builder less than two weeks ago and her official launch was the first time she had been in the water. Club President Mr Paul Sharpe said: “The boat the club is currently using is over 10 years old and about 75kg heavier than the new one.’ The new boat purchase was made possible as a result of sponsorship from the Ettalong Diggers Club, “The teams have already been very competitive in that boat, so this new one should help them go a little faster,” Mr Sharpe said.

One woman’s mission to light up Ettalong