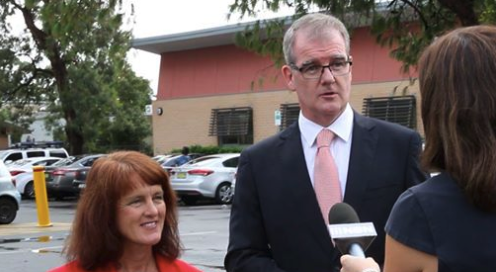 The looming privatisation of Wyong Hospital, as well as its over-stretched emergency department and lengthy waiting times for elective surgery, have put increased pressure on workers within the health industry, according to Labor.

He said under the Liberal Government wait-times at Gosford Hospital remained some of the highest in the state.

As of late 2016 there were 2,240 patients waiting for surgery in the Gosford area.

The majority of patients on the elective surgery waiting list are waiting up to a year for hip replacements, tonsillectomies and ear, throat and nose surgery.

Ms Tesch called on the Liberal candidate to commit to addressing the ongoing health crisis and make it a priority for the Liberal Government.

“It’s clear from what we’ve heard here today that hospital and health staff are being put under increased stress from the Liberal Government’s lack of support for the sector,” Mr Daley said.

“These waiting times and the experiences of these staff are the frontline effects of the Liberals mismanagement of our health system,” he said.

“The Liberals have made it clear that they don’t think twice before selling off our core services.

“Our health staff are under attack by a government who are hell-bent to put profits before patients.”

Ms Tesch said: “Our nurses, allied health workers and clinicians do a fantastic job for our community and are being let down by a government who just don’t seem to care.

“The flow on effects of the Liberals privatisations are clear; we will see less staff, less resources and worse outcomes for patients,” she said.

“All candidates at this election need to make a commitment to put our patients and staff first when it comes to our health services.”