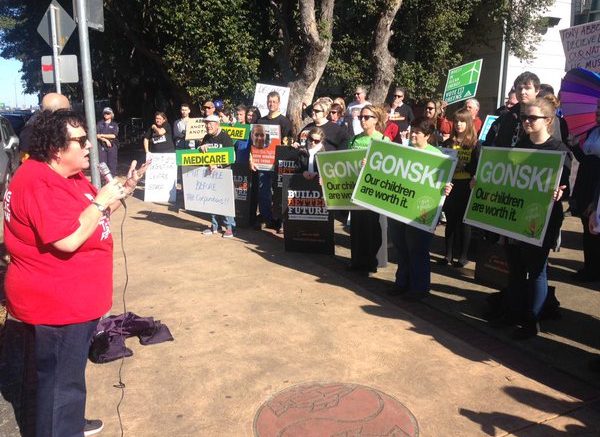 Teachers and parents supporting Gonski needs-based education funding met at the Gosford Waterfront from 4pm on March 15 to discuss how local schools could benefit from additional Gonski funding as the Gonski bus heads to Canberra.

“This is despite Nationals’ MPs, including Mr Joyce, knowing that schools in rural and regional electorates are the biggest beneficiaries of extra funding delivered under the Gonski model. “These are the key messages teachers, principals and parents are delivering to rural and regional Australia during a national Gonski campaign bus tour that began on March 1 and will eventually finish with a protest event outside Parliament House, Canberra, on March 22,” Ms Westacott continued. “We can’t afford to allow the Turnbull Coalition Government to remove billions of dollars out of education because what is at stake is our children’s future,” said NSW Teachers’ Federation President, Mr Maurie Mulheron.

“The Gonski model is designed to bring all schools up to a minimum educational resource standard by 2019, yet by the end of 2017, only 36 per cent of the funding will have been delivered to schools. “It is already making a difference, but Malcolm Turnbull will not fund it beyond this year,” he added. “We know country schools are under-resourced. “If the Federal Government refuses to commit to the Gonski model, the programs and initiatives that are already making a difference to the lives of tens of thousands of children in these schools will have to be scrapped. “The NSW Government is fully funding its share of Gonski. “By contrast, Malcolm Turnbull and Barnaby Joyce want to implement savage cuts to education funding,” Mr Mulheron concluded.