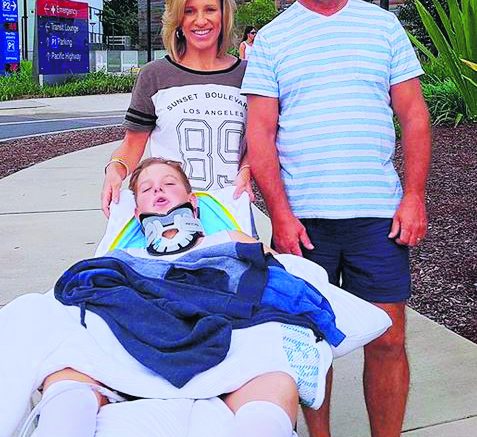 A Go Fund Me campaign to support the recovery of Tumbi Umbi teenager, Riley Hilditch, has raised $25,000 of its $150,000 goal since its inception in early April.
Riley Hilditch is the stepson of Parramatta Eels legend, Brett Kenny, and fractured his C5 vertebrae and seriously damaged his spinal cord while swimming at Chittaway Bay Creek in February.
The community has since rallied around Riley’s mother, Ms Suzanne Kenny, Brett Kenny, and his father, Mr Brian Hilditch, with the Go Fund Me campaign just one of many initiatives supporting the family.
After the accident, the Facebook page, Team Riley, was established to keep the community up to date on Riley’s condition and treatment, and the page has been flooded with messages of support and offers of assistance.
School friends and teachers from Tuggerah Lakes Secondary College, Berkeley Vale Campus, where Riley is in Year 10, also rallied behind the family, organising Ride4 Riley, which took place in Lions Park, Chittaway Bay, Sunday March 26.
In preparation for the event, classmates had more than 600 Ride4Riley wristbands produced and distributed and delivered more than 1,000 request of support letters to local businesses.
While final numbers have yet to be released, it is believed Ride4Riley raised more than $10,000 .
Other fundraising initiatives include a McDonalds’ fundraising dinner at Mingara McDonalds on May 8.
This dinner will take place between 6-7pm, and a fundraising evening is also scheduled for July 22 at Mingara Recreation Club.
Riley’s school is also continuing to raise funds, having raised an additional $1,870 through a Ride4Riley fundraiser lunch, and a colour run is in the works.
Ms Kristine Mapstone, Riley’s aunt and organiser of the Go Fund Me campaign, also announced that Riley had begun rehabilitation at Westmead Children’s Hospital.
“Riley has surprised us all with his strength and resilience during this indescribably difficult time, Ms Mapstone wrote.
Ms Mapstone also thanked all those who donated and the community that has rallied behind her family, but said there was still a long way to go to secure Riley’s future.
“There are still huge financial implications for Riley and his family, ranging from day to day living expenses, accessibility renovations to the family home to accommodate Riley’s mobility needs, appropriate transport for Riley, medical expenses, treatments and carers to enable Riley to live at home, wheelchairs, travel and accommodation for Suzanne to stay by Riley’s side at Westmead to care and support him through the tough days ahead, and the list goes on.
“The road ahead for Riley and his family will be challenging, but they have the love and determination to give him every chance to live the life that every 16 year old deserves.
“What they do need is help financially.
“Since Riley’s accident, we have witnessed firsthand, the incredible power and graciousness of the human spirit, and we thank you from the bottom of our hearts for any donation, small or large, that you can give,” Ms Mapstone wrote.