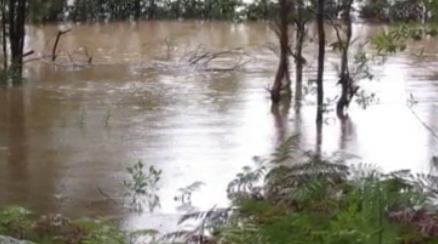 Part of the flood prone area that the NSW govt wish to turn into a rail maintenance facility.

The State Government could move its proposed inter-city rail maintenance facility from the troubled Kangy Angy site to Warnervale as a way to fund the proposed Link Road from Watanobbi to Warnervale.
The Kangy Angy Residents Action Group (KARAG) has said it is not too late for the NSW Government to change its mind about locating the new inter-city train maintenance facility at Warnervale.
KARAG Chairman, Mr Tony Caldersmith OAM, said a move to a site in Warnervale could also create an opportunity to fund the proposed Link Road between Watanobbi and Warnervale.
“TfNSW (TfNSW) is currently struggling with the selection of Kangy Angy for the fast train maintenance site because its poor access and flooding problems have delayed the project,” Mr Caldersmith said.
“To solve some of their problems they intend to build an expensive bridge from the site over the main train lines to Enterprise Drive and connect to that road with a large roundabout.
“This is not an ideal solution because Enterprise Dve is a 90 km per hour road and the heavy trucks entering and leaving the site will then have to travel up to the new roundabout at Wyong Rd, then go west along Wyong Rd to get to the M1 motorway – not a good addition to these roads that are already struggling with heavy traffic,” he said.
Unlike the Kangy Angy site, the Warnervale location Mr Caldersmith wants the NSW Government to reconsider, was listed highly on the original TfNSW site evaluation list but was excluded by the former Wyong Council’s property department in 2014 on the grounds the Council was going to build an “education facility” in the area and construct a Link Rd between Watanobbi and Warnervale.
“Both those would actually have been somewhat west of the TfNSW maintenance site,” Mr Caldersmith said.
“The Central Coast Council retains an interest in having the Link Road and it is in the new Central Coast Regional Plan.
“The problem with this is that the NSW Roads Department has rejected funding the $50 million road on the basis that it is not financially viable.
“The suggested TfNSW maintenance site at Warnervale would need a heavy vehicle road from the site to sparks Rd, probably around 2km which TfNSW would normally fund as part of this project.
“If TfNSW were prepared to fund a proportion of the Council’s Link Rd, it could make the Link Rd a viable proposition.
“The Council would, therefore, gain an advantage from having the TfNSW maintenance site at Warnervale as well as avoiding the heavy traffic increase on Wyong Rd.
“The Central Coast gets the Link Rd at an affordable cost and TfNSW gets a much simpler site, minimal flooding, good access, no residents’ interference and a site that was originally assessed very favourably by the evaluation team,” Mr Caldersmith said.