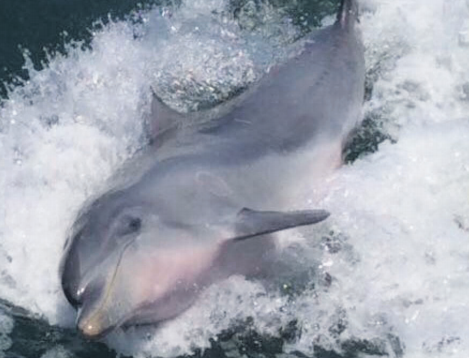 A permanent memorial has been erected and dedicated to the memory of Elusive, Brisbane Water’s lone bottle nosed dolphin. Elusive died after becoming tangled in an anchor line in November 2015.

The dolphin was first spotted in October 2013 in Brisbane Waters. She was a lone dolphin and was quickly named Elusive by the locals because “you never knew” when she would pop up to s ay hello. “She was a beloved wild pet to people ranging from the ferry passengers to local boat users and residents on the Central Coast,” said Daniel Rond from Central Coast Ferries. “Elusive treated the local ferry, Saratoga, as her mum and at times would rub her tummy up against the hull of the ferry while it was moored at Woy Woy public wharf,” he said.

“She was a crowd puller and crowd pleaser demonstrating her tricks alongside the ferry to the amusement of passengers. “Unfortunately in November 2015 she became entangled in an anchor line at Empire Bay and drowned. “She had the line caught around her dorsal fin and tail. “I was involved with local people affected by her death and under the supervision of National Parks and Wildlife in the retrieval of the Elusive’s body. The memorial near Woy Woy wharf for ‘Elusive’

“After her death the community expressed an interest to dedicate a Facebook page to remember Elusive Our Brisbane Water Dolphin. “An interest was then expressed to have a permanent memorial constructed in memory of Elusive and a generous amount of money nearing $2000 was donated by the community. “A permanent memorial has been erected and dedicated to the memory of Elusive near the Woy Woy Wharf. “Left-over donated funds were given to the Animal Welfare League at Woy Woy,” he said.

This story first appeared in the Peninsula News, march 6, 2017