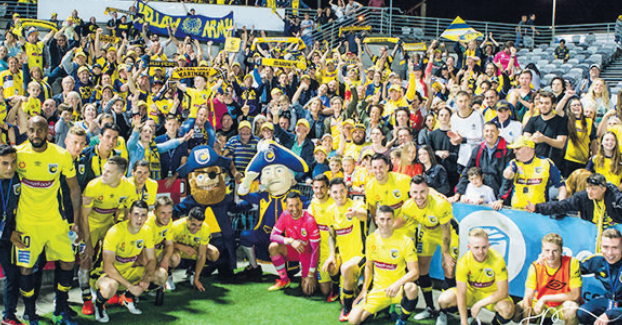 The Central Coast Mariners will need to give everything they’ve got in their match against Adelaide United on Saturday, March 25, at Central Coast Stadium, in order to keep their finals hopes alive.

The Mariners will be looking to make it three wins from three against Adelaide this season, and will be looking to secure crucial points to make the top six for the season. The Mariners and Adelaide are currently ranked ninth and tenth respectively on the A-League ladder, and both teams need to pull out all the stops in a battle to make the finals.

With just two points separating the Mariners and Adelaide, the team knows a win here is critical and Mariners attacker, Connor Pain, said the team’s aim is the top six. “It was a strange week last week, as we’re used to training day in day out in preparation for a game on the weekend, but it was something a bit different,” Pain said. “We’ve had some time off over the weekend, but throughout the week, we have been working just as hard as in every other week in the lead up to this Saturday’s game.

“If anything, we have been training harder to compensate for the loss of conditioning you get from a match on the weekend, so today we had a really hard hit out and a few really hard gym sessions during the week, so we are definitely prepared for the weekend,” Pain said. A resurgent Adelaide United have recorded two positive results in both the Hyundai A-League and AFC Champions League, but Pain is confi dent that the Mariners have what it takes to claim all three points at Central Coast Stadium. “We are feeling really good and really positive going into this one,” Pain said.

“We just need to keep fighting and doing our best. “We need some results to go our way, but if we keep going the way we’re going, the results will change, so we just need to keep playing well and get the three points on the weekend. “People are playing for contracts, we’ve got a chance of making the finals, and we need to make sure we put ourselves in the best position possible, because as a group, we still believe that we can make it and until that’s mathematically impossible we will keep fighting until the end. “We have had a couple of games in the last couple of weeks that we would have really liked to have gotten points from to put us in a better position.

“Our push for the six is still on, and every game from here to the end is a Grand Final for us,” Pain said. Game day festivities kick off at the stadium from 2pm with the Pre-Game Function. The Function will be hosted by Gosford Bowling Club at the eastern side of the stadium. Before entering the stadium proper, sports fans will be able to taste the Coast’s beer and grab a meal at the pre-game barbeque. Mariners’ players not playing in the match will also be available for a meet and greet with fans at the Pre-Game Function from 4:50pm. During this time a jumping castle will also be available for the youngest Mariners’ fans. From 2:30pm, the Women’s Exhibition Match and VAR System Testing will kick off. Further details on this appear in a separate article. A-League kicks off from 5:30pm and is sure to be a nail-biter. The FIFA half time challenge is also back and will pit one Mariners’ fan against an Adelaide United fan in a broadcasted winner takes all game of FIFA. After the full time whistle blows, Mariners’ fans are invited to join in the family photo with the full Mariners squad in the north western corner of the stadium.