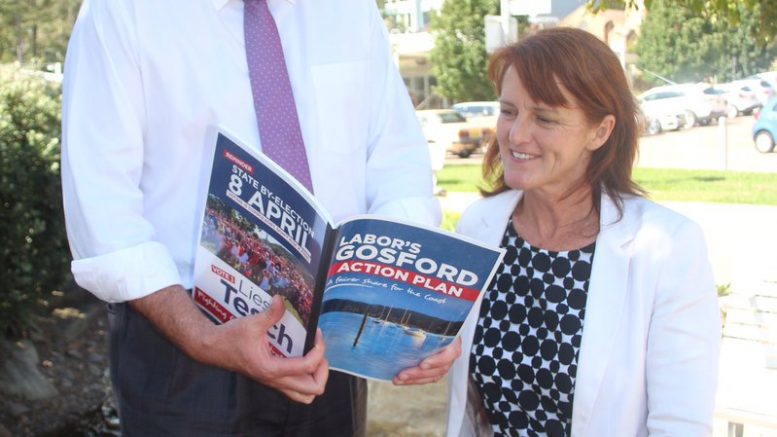 The plan, announced on Monday, March 27, would, according to Labor, provide $10 million for major infrastructure work to refurbish and upgrade regional centres, improve tourism and help 20,000 small businesses operate on the Central Coast.

Although announced as part of Ms Tesch’s campaign to win the state seat of Gosford, the plan included initiatives for the whole Central Coast.

Mr Foley said that a Foley Labor Government in NSW would immediately tackle job projects overlooked by the Liberals.

“The Central Coast has lost 3,100 full time jobs in the last nine months, I find that unacceptable,” he said.

Ms Tesh said: “One very exciting thing for me is our regional refurbishment fund so supporting the local council to refurbish our business areas on the Central Coast, which is not only good for businesses but good for our community.

“It’s the big businesses, it is the big workplaces in our area that we actually need to create more jobs for the people and that’s what the people are asking for … work in our local community,” Ms Tesch said.

The Advantage Fund would be the centrepiece of the Plan and would be used to attract large-scale business investment and work with local government and local companies to build on the region’s existing strengths.

It would focus on key economic development areas including the Gosford CBD, Somersby Business Park, and the West Gosford corridor.

“You would have $20 million for town centre renewal, and that means things like widening the footpaths for more outdoor cafe and dining opportunities, it means tree planting, it means getting rid of graffiti.

“All those things will help small business, local chambers of commerce, support the businesses that are already there, but also encourage new businesses when there’s a cleaner more vibrant, more outdoor-focused town centre in a place like … Gosford,” Mr Foley said.

“It’s about negotiation but also about creating spaces in the community where people want to be,” Ms Tesch said.

At present 30,000 people travel out of the region for work each day and unemployment on the Central Coast is 7.9 per cent, well above the state average, and one in five young people are out of work.

“The Job Action Plan will provide $10 million to be matched dollar for dollar by Central Coast Council for major infrastructure work to refurbish and upgrade regional centres, improve tourism and hep 20,000 small business operate on the Coast.”

Labor also pledged to help restore the “damage” to TAFE to give thousands of young people job skills.

“Labor has a permanent commitment to Gosford … and the needs of the people here and above all else, our commitments to growing jobs and economic activity so that people can enjoy the great lifestyle of this region, knowing that there are good jobs and career paths for their kids,” Mr Foley said.

Arts, culture and community are truly beyond politics