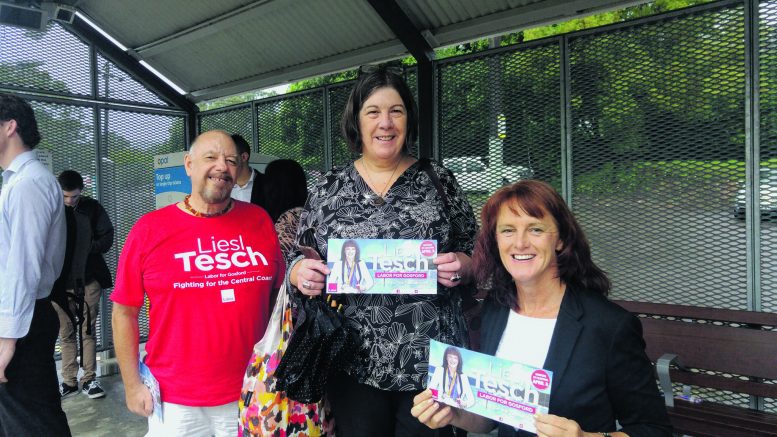 NSW Labor Leader, Mr Luke Foley, has announced a multi-million dollar development plan for the Central Coast at the official launch of the Gosford By-election campaign for Labor candidate, Ms Liesl Tesch.
It included a $100 million fund to create jobs, a 7-day a week Nurse Walk-in Centre in Gosford and a huge boost in funding for both TAFE and school maintenance.
The Nurse Walk-In Centre is a state-first – to be open seven days a week, staffed by experienced nurses, for one-off medical advice and treatment.
Mr Foley pledged to start restoring TAFE to its former status – as the key educational centre for young people to learn skills of benefit to them and the businesses where they are employed.
He said the Liberals have aggressively assaulted and dismantled TAFE in the region, sacking 185 teachers across the Hunter Institute at a time when Central Coast youth unemployment is at 18.3 per cent.
One in five young people on the Central Coast does not have a job.
A scandalous example, Mr Foley said, of the clear neglect the Liberal State Government has arrogantly displayed in Gosford.
“Our Central Coast Jobs Action Plan will create jobs, and bring prosperity,” Mr Foley said.
“We will create a Nurse Walk-In Centre in Gosford … because good medical treatment should not depend on the size of your wallet.
Ms Tesch added: “The Berejiklian Government is defined by what it does not do for Gosford.
“It finds it easy to neglect this region, and try and make us poor cousins.
“We’ll change that, very fast.
“We have developed a comprehensive, costed, achievable, plan for the Gosford region.
“There’ll be continuing community input and we’ll respond to what people tell us, about what they want and need.”