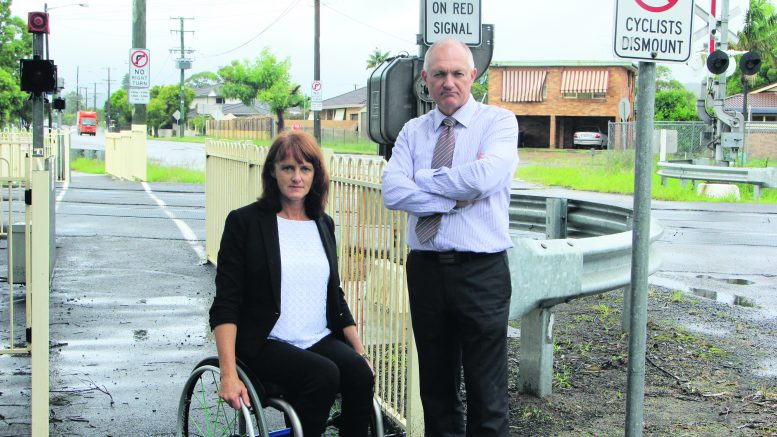 Labor candidate for the Gosford by-election, Ms Liesl Tesch, with Shadow Minister for the Central Coast, Mr David Harris, at the level crossing in Woy Woy

The Labor Party has called on the Liberal candidate for Gosford, Ms Jilly Pilon, must give residents an explanation for why her party has abandoned the electorate.
Shadow Minister for the Central Coast, Mr David Harris, said Ms Pilon should explain “the sad neglect” by the Liberal Party.
Mr Harris said the NSW Liberal Government had, without explanation, abandoned the Woy Woy Road underpass project despite committing to it in the 2011 and 2015 state elections.
The Liberal Candidate will also have to explain to angry locals why their Woy Woy Motor Registry was closed, forcing them to travel to Gosford where there is limited parking, he said.
“There is a long list of betrayals, broken promises and neglect by this Government which any Liberal candidate must provide explanations for.
“This Liberal Government and their candidate can’t look at people in the eye and say they seriously have the interests of locals at heart given their record over the last six years,” Mr Harris said.
According to Mr Harris, other issues including the dredging of Brisbane Water, have also been neglected by the Government.
Mr Harris said he was proud that Labor was putting up a real local for the upcoming Gosford by-election.
“Labor’s Candidate Liesl Tesch lives and works in the Gosford electorate and is a geography teacher at Brisbane Water Secondary College,” he said.