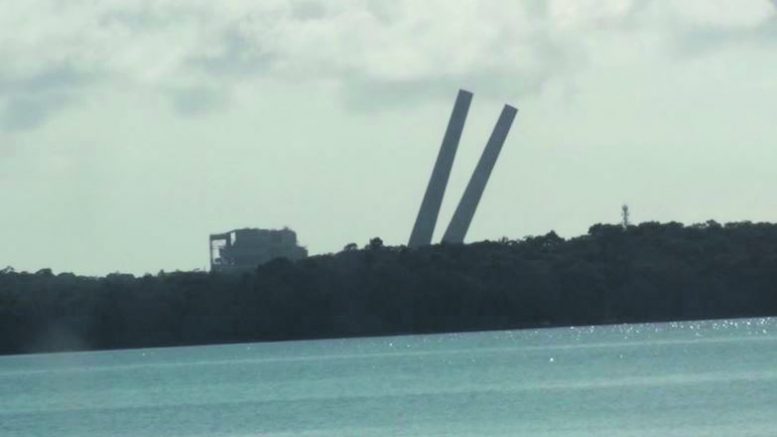 The most iconic remnants of the Lake Munmorah Power Station, the two 155 metre chimney stacks, were demolished on Sunday, March 26, as part of site clearing works.
Each 6,500 tonne concrete chimney, which have been a part of the region’s skyline for decades, were stacked with explosives and toppled in seconds.
The impact was felt throughout Lake Munmorah.
Lake Munmorah Power Station was closed in 2012, leaving behind a reputation as one of the state’s oldest and dirtiest power plants.
During its prime in the 70s, the station supplied up to 40 per cent of NSW’s energy.
Liberty Industrial have been handling the demolition, with the chimneys’ implosion signalling a half way point of sorts for the demolition of the entire plant, which is scheduled for completion in September 2018.
“Munmorah Power Station was built in the 1960s, and was closed in 2012 after 45 years of operation.
“Its ageing infrastructure and cost of operation meant that it was no longer economically viable to compete against newer and more efficient plants,” said Delta Electricity Interim Chief Executive Officer, Mr Ray Madden.
“We’ve appointed Liberty Industrial to undertake this important work.
“Liberty Industrial have been selected for their expertise with large industrial demolition projects and their impeccable safety record.”
Liberty Industrial Founder and Director, Mr Clinton Dick, said the project is in safe hands.
“We have a proven track record with large industrial demolitions and we understand this type of project extremely well,” Mr Dick said.
The demolition project aims to eliminate risks associated with any deterioration of the station, improve the visual impact of the surrounding environment and maximise the reuse and recycling of materials removed from site,” Mr Dick added.
What the cleared land could potentially be used for is currently unknown.

Spanish, flamenco, tango and modern jazz music to be performed at Green Point