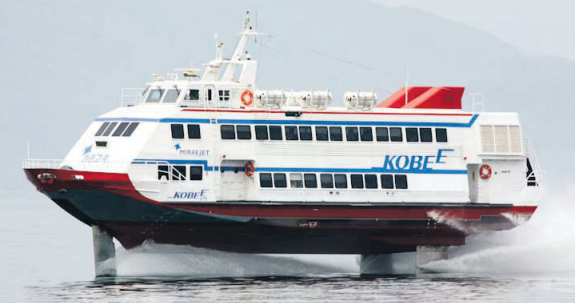 A fast ferry service with an interchange at Ettalong is being proposed as part of a billion dollar business plan that Central Coast Council has presented to the Premier and Cabinet of the NSW Government.

The proposal, presented to NSW Government Ministers at a recent Community Cabinet meeting, included the “construction of Ettalong Wharf and Pier including a transport interchange and parking facilities. “Council is seeking an audience in confidence with the State Government to present the opportunity and formulate a strategy and roadmap for the realisation of the project with a view to it being a State Signifi cant Project,” briefing notes presented to the Ministers said. “This State Signifi cant Project will require partnership with the NSW State Government across a number of portfolios including planning, lands and Roads and Maritime Services. “It has the potential to change the face of the Central Coast region, bring significant employment and economic stimulus to the region and contribute to the social wellbeing of the community,” the notes said.

Mr Steve Duncan, Chairman of the G5 Global Vision Foundation, and one of the proponents of the project, said it had involved years of planning. Mr Duncan had also played a part in previous proposals to develop a fast ferry service between Central Coast and Sydney. “The Central Coast Council has been very meticulous in dealing with our proposal because they want it to happen,” Mr Duncan said. “Our group specialises in infrastructure capital raising and we have serious projects on the go in India, South Africa and Asia,” he said. “We have the DA process and the public involvement process ready to go. “He have brought in the best architects and engineers Australia has to offer and this is about infrastructure. “As an international investment banker, I knew I had to secure the funding first and that is what I have done.

“We have asked Council to give us the green light to start working through all the issues with the community and the environment,” he said. Another element of the proposal would be a privately owned dredge to keep the Brisbane Water channel at Half Tide Rocks navigable for the fast ferries at all time. “The actual channel into Brisbane Water has been fi lled up from reckless dredging and beach replenishment so Brisbane Water is under-utilised because the boating fraternity won’t bring their vessels in,” he said. The boats to be used are similar to those that are currently in use as ferry services between South Korea and Japan.

This article appeared first in the Peninsula News  March 6, 2017

Peninsula has 30 new COVID cases in past week