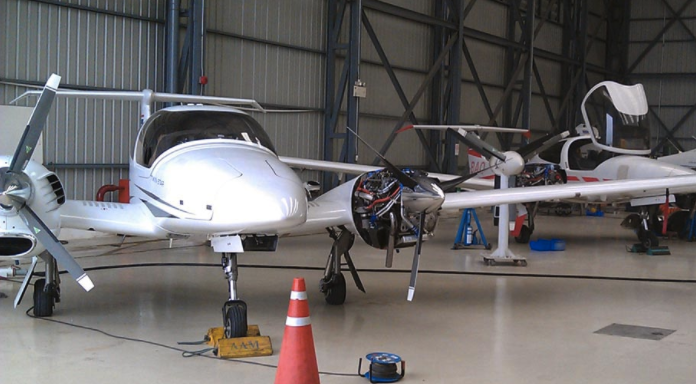 Central Coast Council has lodged a $2.5 million development application to build an aviation hangar at its Warnervale airport.
According to the Statement of Environmental Effect submitted with the DA, the proposed aviation hangar would “specialise in full maintenance repair overhaul of amphibious planes, repair and body repair”.
This specialisation implies the hangar could be used for similar activities to those proposed by AAI, which has also submitted a DA to build a much smaller hangar within the bounds of the airport at Warnervale.
The Council’s proposed development is to be located on 1.63 hectares of Council-owned land, at Lot 3 Jack Grant Ave, within the existing airport.
According to the former Wyong Council’s DA tracker, no advertising of the application was required.
According to the Statement of Environmental Effects (SEE) submitted with the DA: “Council studies in 2015 into population growth projections, passenger demand forecasts and economic impact, have shown that a regional airport is essential infrastructure for the Central Coast’s growth.
“After investigating a number of sites, Council decided on October 28, 2016, to progress with plans to establish a small regional airport, to be developed in stages, at Warnervale, now referred to as Central Coast Airport.
“The proposed hangar development is intended to provide a functional and economical design for general aviation businesses to conduct their activities.”
The SEE described the scale and bulk of the building as “significant” with a maximum height of 16.1 metres, 4.1 metres over the maximum building height allowed on Council’s height building map.
The proposed development would consist of a hangar with a floor area of 5.048 square metres, car parking for 59 vehicles, a one-way circular driveway of between 6.2 metres and 10.8 metres wide to allow for large, rigid truck movements, two amenities blocks, a 20,000 litre rainwater tank for amenities, firefighting infrastructure and associated landscaping and storm water detention.
According to the SEE, the proposed hangar would be as flexible as possible, to allow various leasing options to be realised in the future, including subdivision to accommodate two independent operators.
The SEE also states that “the subject site is fully serviced in terms of all infrastructure required to support the proposed aviation hangar with connections to those utilities to be created as part of the proposed development”.
In conclusion, the SEE recommends that Council support the proposed change of use as a development consistent with the Central Coast Airport Development Guidelines.
“The proposal is generally consistent with the objectives of the zone and relevant development standards under Wyong LEP 2013.
“Whilst the hangar exceeds the maximum building height limit…justification has been provided…to demonstrate that the proposed development is appropriate for the site, particularly in light of the development’s compliance with the Development Guidelines prepared for the airport”.
An appendix to the SEE, which examines whether the 34 per cent exceedance of the Council’s own height limits is justifiable said: “The subject site is located within the Wyong Employment Zone (WEZ), an area Central Coast Council believes will help create 6,000 jobs and $1.5 billion in investment.
“The site is currently underutilised and the proposed aviation hangar is considered to support Council’s desired future growth in the area.”
The dimensions of the Council hangar make it significantly larger than the hangar that is the subject of a DA from AAI although the AAI DA states its hangar will cost more than the substantially larger building proposed by Central Coast Council.
In fact, the Council’s hangar is nearly twice the size of the AAI hangar at 2760 square metres.
According to the SEE, the Council’s hangar is 16 metres high so that it can accommodate Dash 8 aircraft Bombardier 8-Q400.