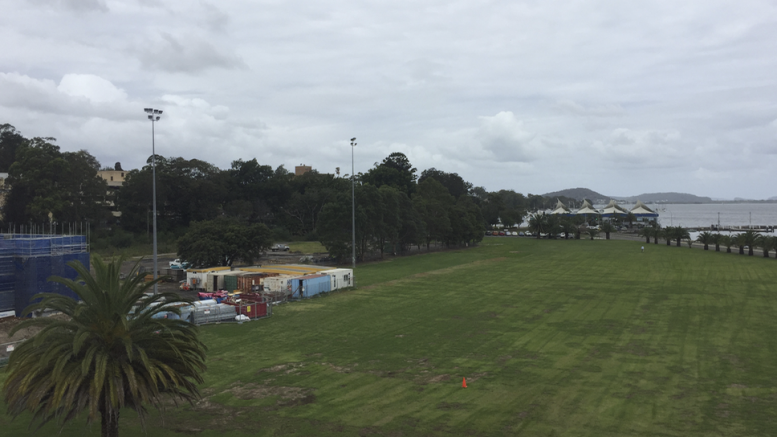 Leagues Club Field earmarked by council to build the PAC

Central Coast Leagues Club Field has been nominated as the Central Coast Council’s preferred location for the proposed Regional Performing Arts and Conference Centre (RPACC) for the region.
The Leagues Club Field is located on Georgiana Tce, immediately below the old Gosford Public School site.
Group Leader of Connected Communities, Ms Julie Vaughan, said the location would be a great fit for a new cultural hub on the Central Coast.
“We looked at a number of sites in and around the CBD and believe that this is the ideal location for what will be a landmark facility for the region,” said Ms Vaughan.
“Together with the community, we will begin the journey of making this dream a reality and an exciting development for the Gosford CBD,” she said.
“Staff will now be undertaking detailed assessment of the site, revising business plans and progressing with detailed designs for the RPACC, and we will keep the community involved as we go.
“An appropriate business model and venue specification is important for the RPACC’s longevity and overall success, ensuring the community see the full value of this cultural facility for generations to come.
“We want to create a world class, financially viable facility that the Central Coast can be proud of.”
Council Administrator, Mr Ian Reynolds, said the community had been waiting for a decision on the site and that had now been delivered.
He said it was now time to move the conversation towards making it the best centre it could possibly be.
“This is another great step forward for our new Council, making progress on an important community project that will help revitalise the Gosford CBD and put it on the arts and cultural map,” Mr Reynolds said.
“It will support tourism and business as well as promote culture and talent development throughout the region, creating jobs and opportunities for our growing region.”
“There is still a long way to go, but Council will be working closely with our state and federal counterparts to secure their previous funding commitments and enthusiasm for the development of this important cultural venue.”
Parliamentary Secretary for the Central Coast, Mr Scot MacDonald, welcomed the announcement.
“The NSW Government has asked for further details on the proposed site for the RPAC from the Central Coast Council,’ Mr MacDonald said.
“When we have more details on this project, the State Government will be in a position to outline its response and commitments,” he said.
The NSW Government had previously and categorically stated that its $12 million funding was contingent on the RPACC being built on the Gosford City Park, also known as Poppy Park.
The by-election for the NSW Seat of Gosford may make it difficult for the Liberal Party to take its funding for the performing arts centre off the table, or make it contingent on a particular location.
Chief Executive Officer of the Central Coast Conservatorium of Music, Mr Patrick Brennan, said: “We are hopeful that the $2 million [out of the $12 million] that has been pledged will be forthcoming and we are hoping to have clarification around that in the coming months.”
Mr Brennan said he was unable to comment on the selection of Leagues Club Field as Council’s preferred site for the centre.
“I haven’t seen exactly where it is going to land,” he said.
“I think there are some good options in that area, and until I see exactly where they are placing it, I can’t comment.”
Mr Brennan said the best location on the site would be where the circus tent is usually erected each summer.
“That, to me, looks like a prime site, because it should function beautifully there with regards to community engagement on a whole number of levels and ensure that the green space is left intact.”