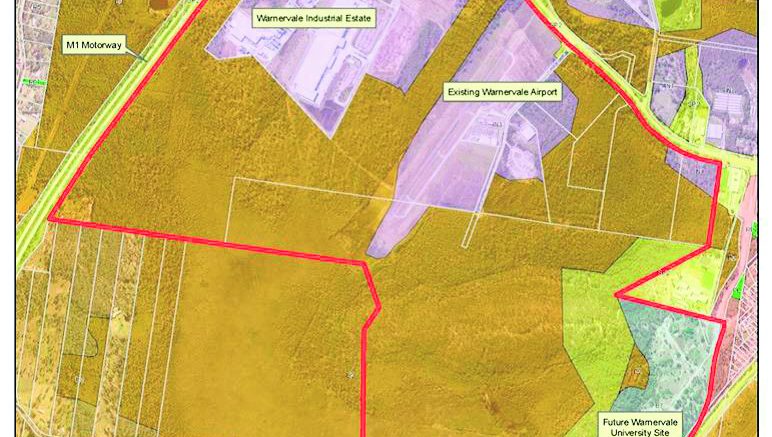 The biocertification study area is outlined in red

A strategic lands biocertification project, under the Threatened Species Conservation Act (TSC Act 1995), is underway on approximately 523 hectares of land at Warnervale.
According to Council, the project was a way to facilitate “development on much-needed employment lands while protecting high-value environmental habitat lands”.
Central Coast Council is a major land owner in the study area, which includes Central Coast Airport and the former Wyong Council’s proposed university site.
The site also includes areas of the SEPP 14 protected Porters Creek wetlands.
Should the NSW Environment Minister agree to biocertify the land, it will remove the need to undertake threatened species assessments as part of future development proposals.
Within the study area, it was expected that 97 Ha of habitat would be impacted, which would require Council to find 388 Ha of ‘offset’ land to ‘replace’ the losses.
According to Mr Scott Cox, Central Coast Council’s Group Leader Environment and Planning: “The strategy will identify areas of high-value vegetation and habitat for permanent protection and the areas that will deliver the best employment-generating development”.
The process was initiated by the former Wyong Council and taken up by the Central Coast Council at a meeting held on July 13, 2016.
The report to Council Administrator, Mr Ian  Reynolds for the July 2016 ordinary meeting said Council had engaged Eco Logical Australia (ELA) to prepare the biodiversity certification and offset strategy covering land to the south of Sparks Rd, Warnervale.
“The proposal will streamline the development approval process and assist with planning for the expansion of development opportunities in the southern portion of the Wyong Employment Zone (WEZ),” the report said.
It recommended that a draft Biodiversity Certification Assessment and Strategy be progressed via an application to the NSW Office of Environment and Heritage (OEH).
The draft assessment and strategy was “being prepared” at that time.
Mr Reynolds resolved that Council would undertake community and agency consultation in accordance with OEH requirements.
At that time, a confidential document, believed to be a draft biocertification assessment or strategy, was provided to the Administrator.
The report to Mr Reynolds that was placed in the public domain included a timeframe which expected the assessment to be completed and lodged with the NSW Office of Environment and Heritage in August 2016.
Council anticipated reaching agreement with the OEH to proceed to public exhibition between September-December 2016.
A report was due back to council on the results of the public consultation by March, and a request made to the Minister for endorsement in April.
Gazettal of the biocertification was anticipated to be achieved by October.
The project is behind schedule, but public consultation is expected to happen shortly.
The process of Biocertification was established under the NSW Threatened Species Conservation Act 1995 (TSC Act).
The NSW Minister for the Environment may biocertify the land if satisfied that the conservation measures set out in Council’s application will lead to an overall improvement, or maintenance, of biodiversity values.
Biocertifying the land would streamline the assessment of future rezoning and development proposals “and remove the risk of developable land being sterilised.
“It will result in positive environmental outcomes by protecting ecologically significant land and wildlife corridors in areas where environmental offsets will be established.”
The offsets may be located on the site or “off site”.
Once biocertified, development that removed native vegetation from the land could go ahead because biodiversity losses would have been mitigated through the offsets.
“Offsets are proposed to be secured within the biodiversity certification area by establishing Plans of Management and Biobank agreements and on a number of other Council-owned parcels of land outside of the study area.
An initial assessment of the land estimated that 307 Ha of the offsets would be available in the proposed area and the other 80 to120 Ha outside of the study area.
“A review of Council-owned parcels of land has been conducted by ELA and a number of potential sites have been identified which have a similar range of ecosystem/species credits to those which will be impacted by development.
“A small number of Council-owned bushland sites are likely to be targeted to meet any offset shortfalls.
“Only those sites which are not required for …operational purposes will be selected for the purposes of providing offsets,” the July report said.
The majority of threatened species issues within the study area are listed under the TSC Act.
A small number of species on the land are listed under the Federal Environment Protection and Biodiversity Conservation Act 1999, so developers would still need to examine those even if the land was biocertified by the NSW Minister.
The land which is proposed to be biocertified includes IN1General Industrial Zone and B7 Business Park Zone land.
Other land that Council wants to rezone to Industrial will have to go through a separate rezoning process, which was also initiated by Council in the second half of 2016 for some of the land.
The study area is bordered by Sparks Rd to the north, the M1 Motorway to the west and Railway Rd to the east.
In developing its biocertification strategy for the area, Council needed to consider: habitat corridors/connectivity; the presence of vegetation qualifying as Endangered Ecological Communities (EECs).
Development impacts must be quantified and offset ‘like for like’ and expressed as ecosystem or species credits.
‘Red flags’ triggered by the presence of threatened flora and fauna, drainage lines, State Environmental Planning Policy No 14 Coastal Wetlands (SEPP 14), EEC’s and over cleared vegetation types must also be considered.
A final biocertification impact analysis would need to be done on the development areas identified within the biodiversity certification area prior to lodging it with OEH for review and prior to it being placed on public exhibition.
A further report will be prepared for consideration by Council after the biodiversity certification strategy has been publicly exhibited.