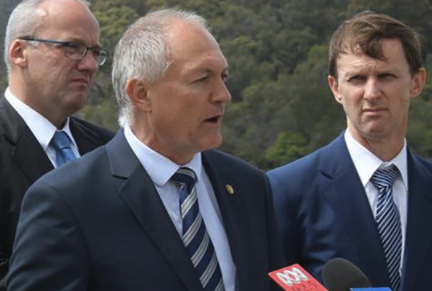 Residents should be given the opportunity to vote to “demerge” Gosford and Wyong councils, according to Shadow Minister for the Central Coast, Mr David Harris.

He was commenting on a call by Shadow Minister for Local Government, Mr Peter Primrose on the new Premier Ms Gladys Berejiklian to fi x the “dog’s breakfast” of forced council mergers left behind by her predecessor. “The Government’s failed policy of forced council mergers has caused great angst in the community and resulted in former Minister Paul Toole losing his portfolio,” Mr Primrose said. Mr Primrose said he called on Ms Berejiklian to immediately allow communities in forcibly merged councils to voluntarily demerge. He called for the release the secret $400,000 KPMG report used by the former Premier to justify the forced mergers.

Mr Harris said he supported Mr Primrose’s call for a plebiscite and said it could be held in September as part of the local government election. “I’ve called that we be allowed to have a plebiscite in September to ask residents,” Mr Harris said. “From what I can see people were full of hope for the new Council but their hopes have been dashed,” he said. If the Central Coast Council moves beyond the September election as a fully-merged local government, the Peninsula will be included in the Gosford West Ward with communities as diverse as the Gosford CBD and Mangrove Mountain.

This article appeared first in the Peninsula News