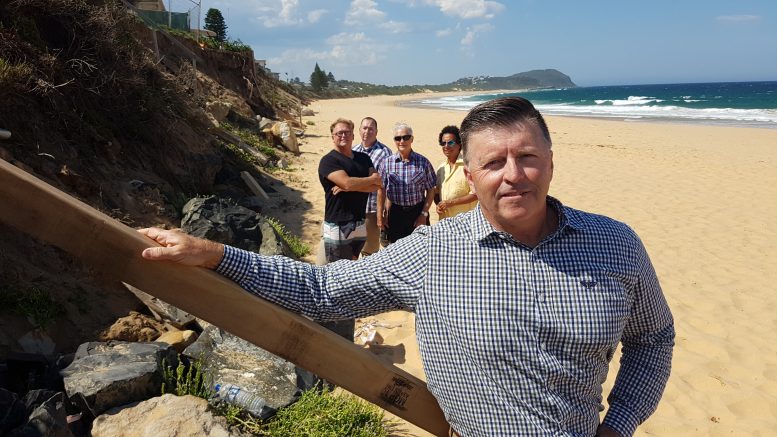 Long-term Terrigal resident and NSW Member of the Legislative Council, Mr Mike Gallacher, has decided to champion the cause of Wamberal residents who are fighting to protect their properties from coastal erosion.
Mr Gallacher said he was willing to work with NSW Ministers to bring about a short- and long-term solution.
“There is the local issue with the revetment wall, and then there is the greater issue of peoples’ property rights,” Mr Gallacher said.
“I haven’t been to Collaroy, but there seems to be a disparity between the way the erosion was rectified and the way Wamberal residents were treated,” he said.
Mr Gallacher said he was confident that the new NSW Minister for Planning, Mr Anthony Roberts, would be supportive of finding a viable long-term solution for the affected property owners.
“I have spoken to the Minister and residents and I am confident a meeting will take place that will bring about a resolution,” he said.
“What I am asking for in the era of the new Berejiklian Government is that we consider hitting the reset button.
“Consider taking a step back from the proposed State Environmental Protection Plan (SEPP) for the coastal zone.
“We need to take one huge step back because people are talking about property rights and once you start to put lines on maps, you’re not just going to affect the million-dollar beachfront properties, you are going to affect the battlers around Brisbane Water and Tuggerah Lakes.
“What about we get a wiggle on and get some protections in place,” he said.
Mr Gallacher said he had stayed out of the public eye for the past three years because he had been implicated in the Independent Commission Against Corruption’s (ICAC) Operation Spicer.
“It is my intention to recontest the 2019 NSW election,” Mr Gallacher said.
“I have advocated for the Central Coast for over 20 years in Parliament and I feel that I have more to give.
“I thought the treatment of me [by ICAC and the media] was appalling, humiliating, embarrassing and false.
“I find it offensive that I was called untruthful and I will fight to continue to reclaim the reputation I’ve built in 37 years of public life.
“The allegations were reported, but there was no mention of the things that were unable to be proved by ICAC.
“I know this area like the back of my hand and my objective is to make the Central Coast a priority again and win back seats again, because working class conservatives need to be heard,” he said.

Sawtell a good example for Avoca