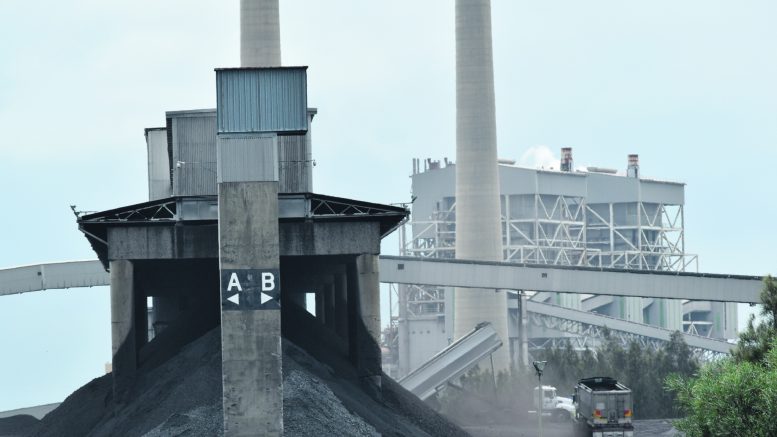 Community groups have initiated an EPA investigation into air pollution from the Vales Point power station at Mannering Point.
It has been alleged that coal trucks dumping thousands of tonnes of coal outdoors at the power station have created clouds of dangerous coal dust, just hundreds of metres from residential Mannering Point.
“We reported the pollution event immediately and looked forward to a prompt investigation by the NSW EPA to stop and remedy this serious air pollution problem,” said Dr James Whelan, researcher with Environmental Justice Australia.
According to Dr Whelan, particle pollution from coal dust causes serious health impacts including respiratory and cardiovascular illness, asthma and hospital admissions.
Under their pollution licence, the Vales Point power station operators must carry out all their operations and activities in a manner that will minimise the emission of dust.
When community members investigated, coal trucks were uncovered and no water was sprayed to control dust.
The Vales Point power station reported emitting 34 million kilograms of 30 substances in the 2014-15 National Pollutant Inventory, including 66,000kg of coarse particle pollution.
Elsewhere in NSW, coal is transported into power station furnaces by conveyor belts that are entirely enclosed.
“We expect a major polluter like Delta Electricity to do all they can to minimise pollution,” said local resident Mr Mike Campbell, who witnessed the pollution.
“It’s shocking to see Delta Electricity dumping thousands of tonnes of coal outdoors in hot windy conditions, exposing our community to toxic pollution,” Mr Campbell said.
The pollution was reported to the Chief Regulator of NSW, Mr Mark Gifford, and Regional EPA Director, Mr Adam Gilligan, on the evening of Thursday, February 16.
The closest EPA air pollution monitoring is more than 25km from the power station.
The Vales Point power station was sold by the NSW Government in 2015 to two investors in a $1 million deal.
It is expected to close by 2022.
Dr Whelan said the EPA had responded to the Environmental Justice Australia pollution report by stating Vales Point was using water trucks to control the dust but, he said, on two out of the three occasions he visited the site, no water was being sprayed to contain the dust.
“Tens of thousands of tonnes of coal are being dumped by very large, and often uncovered, dump trucks at Vales Point.
“There are mountains of coal as high as three-storey buildings within a very short distance to the residential areas of Mannering Point and Blue Haven,” Dr Whelan said.
“We were stunned by what we saw at Vales Point.
“It looks like they have the same sort of conveyor system as other power stations, but it is not being used.
“The EPA said the conveyors will be in use by April, but that is still two months away, so we believe operations should be closed down until that conveyor is operational,” he said.
Dr Whelan said it was his contention that Delta was not investing in the power station because it was due to be closed in 2022.
“It is being run like you would run a second hand car: get another year out of it without spending any money or take it to the wreckers.
“That is not what best practice looks like; it is not being a good neighbour,” he said.
Delta Electricity has been asked to respond to Environmental Justice Australia’s claims about Vales Point.
Dr Whelan said the latest report to the EPA was part of a 39-year history of campaigning by local politicians and community groups to get air pollution monitoring in place for communities living close to power stations like Vales Point.