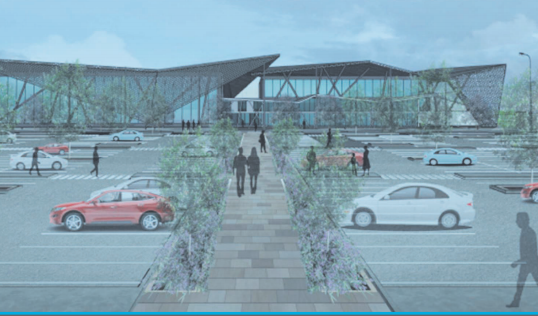 The Tuggerah Regional Sporting Complex will include an indoor venue

A contract has been awarded by Central Coast Council for the construction of stage one of the Tuggerah Regional Sport and Recreation Complex.

The $23.71 million sporting complex will include a premier ground with another nine playing fields, cricket pitches, public amenities including change rooms, canteen facilitates, store rooms and parking at Lakes Rd, Tuggerah. Council’s Administrator, Mr Ian Reynolds, said the awarding of the contract was a step towards positioning the Central Coast as a destination of choice for major sporting events. “We have previously had to turn away some state competitions due to a lack of appropriate facilities,” Mr Reynolds said.

“The economic benefits that will fl ow to our community from hosting large sporting events is huge in dollar value, creating local jobs and boosting tourism,” he said. Work on stage one is anticipated to take 12 to 18 months to complete and will create up to 70 new full-time employment opportunities during construction. “A further 28 new fulltime jobs will be created in the region after fi ve years of operation of this complex, boosting much needed employment opportunities on the Coast. “This is a really exciting time as Council brings much-needed infrastructure and facilities to the Central Coast to improve our community’s quality of life and deliver projects the community needs, wants and values.”

The final stage of the project will see construction of an indoor sporting centre incorporating six basketball courts, amenities, sporting officers, a kiosk and a 3,000 seat grandstand to bring the total value of the complex to $53 million. The tender was awarded to Norths Construction who also built The Art House in Wyong, for which they won a 2016 Master Builders Association Award.